Viral blog--What Were You Doing Way Back When?

Mary DeMuth over at RelevantBlog had an idea, and it's right up my alley on looking back (though in running if you look back, someone might be gaining on you, so says Satchel Paige.)

From her blog:
"Quick: What were you doing ten, twenty and thirty years ago?
Here's Mary's:
Ten years ago: I lived in Edmonds, Washington in a blue house with white trim. We had a white picket fence that Patrick and our friend Dave Spiro built. We attended Sunrise Christian Fellowship. I was newly pregnant with my third child, Julia, feeling sick to my stomach. I helped format newsletters and wrote in my spare moments. I was a full time mommy, and I reveled in taking walks with my friend Kathy. My closest most amazing friend was Stacey. My hair was brown, not blond. I was out of shape, but I weighed less than I do now (go figure). I loved to cook and I had an amazing group of really fun friends.

Twenty years ago: I was attending Pacific Lutheran University, majoring in English. I lived in a dorm and lamented dorm food. My dearest friend was Julie. We had amazing adventures together. I sang in coffeehouses, attended Puget Sound Christian Center, and was far too anal-retentive about grades. I was too skinny. I had a great group of Christian friends who prayed me through college. God healed me of much during that year of my life. I think that's the year (gasp!) that I got a perm.

Thirty years ago: I was in the fifth grade, with the meanest teacher of my elementary career. We lived in an old white clapboard house on several acres. In two months, my biological father would be dead. My best friend was Amber. I had horses, stringy hair, and was mildly interested in grades. I walked to school. We lived near a convenience store where I discovered the beauty and joy of frozen yogurt, way before TCBY made it popular.

Back to Crystal:
As far as I know, I haven't been tagged, but in case I am, look for me to be linking back to those people as well. 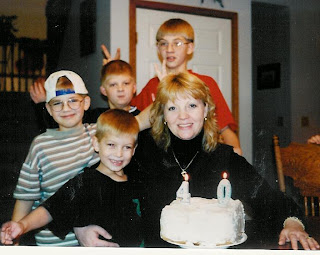 Ten years ago I turned 40 (ok, do the math.) We had just moved back "home" and I wasn't happy about that. I no longer had a job or important activities or ministries. My four boys were all in elementary school and all of them and my husband and my parents and my husband's family were thrilled we were "back home" to raise our kids where we were raised. My mom died in April, and my dad was walking in a fog. Aunt Lola was still with us. But as you see in this photo, we still had fun. I thought I was old! And I decided to take a writing class because I couldn't teach P.E. any more, or be on the school board and had no friends yet. Oh, yeah. I could see without glasses. 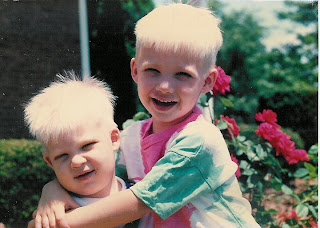 My second son, Jared, was a year old and my first son, Jordan, was 3. We had just moved to my husband's first job and bought our first house. I didn't know anyone, but had lots of friendly, nosy neighbors. I was losing weight rapidly and soon would be dangerously low. (Son #3, Bryce, a few months later would be the saving child who would snap me out of the downward weight spiral and got me to eating to keep him healthy.) Have I mentioned that I don't like living in town and I don't like moving? 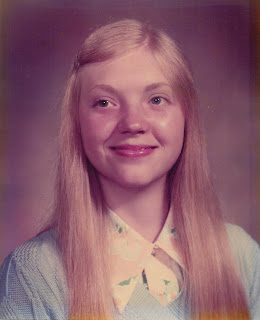 I was a college sophomore at Ball State University, Muncie,IN (same university Dave Letterman went to,) getting ready to have my below-waist length blonde hair cut up to my ears by a girl who lived on my floor (she had a beautician's license.) I had my ears pierced the first time.

I was considering changing my major from journalism to elementary education and had to drop my journalism scholarship to pick up another one. I was still living with my best friend (BFF) from high school, Linda. I had just got a job as a pre-school teacher right off campus at a church pre-school. (Great job.)I was taking a writing correspondence course with The Children's Institute of Literature (or something like that.)

That winter we had an energy crisis(we used coal) and our campus went on conservation of energy practices (people frowned and considered lynching if you played your albums(!!) on your stereo or used a blowdryer. (fortunately they couldn't hear my hot pot that heated water for my hot chocolate.)

I had interviewed a young Iranian woman on campus the spring before (article in the newspaper) and tensions were high with Iran (and tense on campus with Iranian students.) The hostage crisis in Iran erupted. We had a debilitating blizzard that shut down the campus earlier in the year (my freshman year) and another one hit right at the turn of the calendar in January. I had taken a phys ed conditioning class and dance classes and was in top shape,but was losing more weight.


and I'd love it if you would tell me what you were doing, too, or write it on your blog and let me know.
Posted by Crystal Laine at 8:38 PM

Thanks so much for participating, Crystal!! Interesting life. I need glasses now too. Grrrr.

Not surprised you were a journalism major. :) Fascinating how God puts a life together. So many facets to a person--girl, student, dreamer, wife, mother . . . Loved seeing a bit more of you. Hope we'll meet in person one day soon. Hugs and blessings to you. You are an inspiration to many with your words.

I love the fact that you added pictures. I also love the pictures.