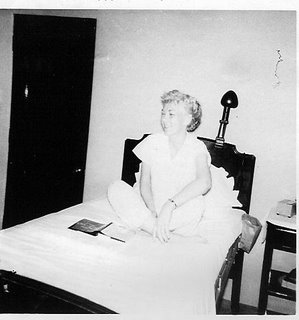 
A lot of people I know are ill today. I have a cousin Sally in her final stage on earth; an ill husband and son; an uncle who is suffering the fallout of a stroke; an aunt who has a multitude of illnesses, but may also have ovarian cancer. We will always have the sick with us. It is one of the fallout events of sin. How can God allow such stuff? Well, we allowed it. And He tries to get us out of our messes.

There are so many new discoveries of medicines, healthy practices and treatments. What gets me is when people deliberately try to harm their own health--like with smoking or illegal drugs or simply by not practicing moderation. And then, people want to blame someone else for whatever is wrong. They "sue" the very people who have tried to help them, or the people who gave them what they asked for! That's just not right.

Then, there was my mother. You can see her above. She spent several years in a TB hospital--a hospital you were required by law to enter if you had the disease of tuberculosis. She had such a strong will to live. She didn't place blame on anyone, and she relied on God to help her through. She wanted to stay alive and did everything she could to keep that way. Despite her best intentions, the doctors removed one lung and two lobes of the other lung. Yet, she lived on. They caved (broke) the ribs on one side and allowed the crushed bone to fill the cavity where the lung used to be. It was because of this technique, that she eventually suffered at the end of her 64 years and caused her heart to move over to the other side. It was a price to pay. But she got to see her kids grow up, get married, have children of their own.

Can you see her smiling in this picture? Despite her horrible prognosis, she found time to joke and smile. I think by making friends (she was far from everyone whom she loved and left alone in this hospital,) I think she found a way to endure the tortuous treatments and surgeries and worst of all for her--separation from her family. It is an incredible testament and one which demonstrated to me how others could do the same. Many people have, too.

"I do not believe that sheer suffering teaches. If suffering alone taught, all the world would be wise. To suffering must be added mourning, understanding, patience, love, openness and the willingness to remain vulnerable."

This is something my mother practiced, experienced and understood in her own suffering. You can do this, too. Whatever your burden is.

Jesus said, "Come to me, all you who are weary and burdened, and I will give you rest."

Maybe that rest comes in this life, or maybe it comes when you die. Regardless, the rest is in Jesus. In Galatians 6:2 Paul says, "Carry each other's burdens, and this way you will fulfill the law of Christ." This is what we do in ways that we can. Maybe I lifted a burden off your shoulders by sharing this story. Hope so.
Posted by Crystal Laine at 9:51 AM

Beatufiul, Crystal. I love the writings of Anne Morrow Lindberg. Can you tell me where you found this quote?

"Regardless, the rest is in Jesus."

It's odd...I was driving home today thinking about some things going on in my life and in my current wip. I realized my theme needed to just be Jesus to others.

Allow them to see him in me. No small thing. I was so tired and overwhelmed with the thought of it that I could just hear God whisper, "rest in Me"

Here is a web site where there are many quotes from Anne Morrow Lindbergh,Karen.

I ripped this particular quote from a newspaper on June 25,2001. (I happened to jot down the date.) It has a huge splotch on it, but it has been tacked up above my computer since...2001. When something speaks to me, I rarely change things. (smile)From all my research, she must've just said it, as I have yet to find it attributed in any of her works.

Thank you for sharing a little of your beautiful mother with us! To have gone through what she obviously had to go through and still be the wonderful person you remember is something that many do not have the strength to do. Of course, relying on God is the source of strength and so many people fail to place their trust in Him when something goes wrong in their lives.

She was gorgeous, Crystal. I can you in her.

What a wonderful tribute to her this is.