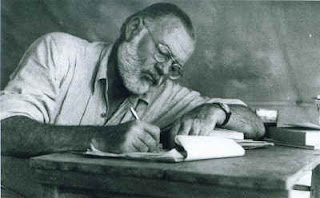 I hear so many voices in my head that sometimes I'm lost in the confusion. Shirley Jump says, "You can fix everything but a blank page." She's right. I fix other people's pages--their topic, their characters, the voice, the plot and I listen. I listen to the writer intently until his voice becomes my voice, his thoughts, my thoughts.

So, sometimes I write--nothing. I can ignore fear. I can even ignore the doubt. But I cannot seem to ignore the other voices who crowd out the voices clamoring to tell me the story that only I see. Someone very wise told me I need to choose what to put into my head and how to fill my day and sometimes I don't do that. I don't choose; someone else chooses for me. I don't know about you, but I cannot write like that.

In one of my favorite movies, "Finding Forrester," Forrester tells Jamal "to start with someone else's words until your own start coming."

Ok. Haven't I done that?Apparently not.

My biggest thing I ignore is listening to my own story. It's there. I remember it, but I push it into closets, boxes, under rugs and into corners. I threaten it if it peeks out.

"Don't talk to me. You don't matter. I need to hear these other important stories."

They are important stories, the ones out there asking for my time, but my time is ticking for me and never goes back to start. I need to finally listen to the stories that are mine.I listened to them once. When I was in high school and wrote in notebooks. One day, when I went off to college, I stood by our burn barrel and burned each one of them. I still am not sure why I did that.

I haven't listened to it in a long time, but every-once-in-a-while I hear a bit of it. Today I heard it again when I read a front page story about a man who was arrested for drugs on which the street I grew up. Yeah. So I listened to the things that happened back there, back then. I had in my brain that we were a nice family, on a nice street...right? Well, maybe not. My mom was the saint of the street, but maybe things weren't so simple and sweet. Not so idyllic.

We lived across the street from a truck dispatcher who drank too much and his second wife who also drank a lot and was addicted to narcotics. They lived next to a woman who had four little girls, and she worked as a cocktail waitress at night--and the girls stayed there alone. She slept during the day and the girls were always outside and the youngest always had a runny nose. She had never married and rumor had it that she made money other ways, too. Maybe so her girls would eat. The oldest, who was under 12 and near my age took my birthstone ring that my grandmother gave to me one day when we played in my room. She showed it to me, the band cut so she could wear it on her thick finger. When I said, "Hey, that's mine," she ran home. My mother chose to just let her have it.

Next to them were a family of five whose kids left all their toys outside, including clothes sometimes. We had a dog who used to bring it all and leave it on our doorstep each night. We had to go around the neighborhood asking, "Is this yours?"On the other side of us across the street from our corner was a really nice family of four who were Mormon. They kept to themselves. Their two teenage daughters babysat me when a kid from down the street hit my brother in the head with a hammer and mom took him to the hospital. They came over to play with me as I laid in our hammock when I had stepped on the sharp dog's bone and got blood poisoning. I had to leave my foot up high.

My brother and I often sat next to the fence between our house and the couple with no children who had an above ground swimming pool, but were hardly ever home. They never said hello to us and I think didn't like us watching them. I tried to imagine what the inside of their house must be like because they seemed glamorous, like movie stars.

Down the alley was the mean drunk who used to come down the alley and threaten my brother and me and our German Shepherd, Rin. One day he cussed us out (we never said anything, just watched him with alarm as our dog threatened to come over the fence to attack him) and he threatened to kill us. My dad was home that day and the man got a visit from my dad. Let's just say that my dad was a very scary guy and we never saw that man walking by ever again. I can only imagine what he said to the man.

In that same alley directly behind us was a two-story brick church--Pentecostal. The people never said hello to us, never invited us to join them, never even looked at us. I would listen to their Sunday morning singing and sometimes when the windows were open I'd hear their strange language that filled their ears with some sort of passion, but meant nothing to me.

We had a white picket fence, a grape arbor that my mother made grape jam and thick,sweet juice from, a vegetable and rhubarb patch, a sour cherry tree, apple trees,a peach tree and peony bushes. We had a swingset that I think I played on every day or so it seemed, and plenty of trees that my brother climbed in and "flew" out of, wearing nothing but my opaque tights, undershorts over that and a Superman cape. We had a wading pool in the side yard that was surrounded by a chain link fence where we kept Rin, who liked to climb on top of his doghouse like Snoopy. He was the wonder dog who tore up my brother's new winter coat when he wrestled with him and who we would sneak treats and petting to through the crank out windows in the dining room. My mom knew why he jumped with his muddy paws on the windows--he wanted us to come play.

My dad parked his semi truck in the front, but our car was in the carport along with our bikes, which someone stole my banana seat purple bike from there and I never had another cool bike like it again. I cried for days about it. My dog, Candy, the Pekinese, went outside from that door and often stayed out there. she was old and never went anywhere.

All these kinds of things demand my attention. I think about that little girl I was then and all that I saw and knew about this street, about the time. I went to a private church school and Sabbath school, which was like no one else I knew on this street. The story that sings in my brain and demands attention is on this street. But I ignore it. I think, "I should write this or that," but I don't know if I should write any of the story of West 11th Street.

There is no secret to writing. If you are looking for the magic or the secret, then you look in vain. Despite anything I've told you, no matter what, you must write anyway because if there is a secret, it's not really a secret, but in plain sight. Write and listen to the voices who demand to be heard right where you know. Write even if you do not know what to write. Write anyway.

I remember the day on West 11th Street when the African American woman stabbed someone and then went on a "rampage" all along the street, lashing out and running, avoiding the police who talked in monotone on the police scanner. I am not sure now if she was drunk, on drugs or had a mental instability--or maybe someone was hurting her and she just couldn't take it anymore. That could happen on West 11th Street.

These are all people I remember most vividly in my life, whom I have tried to forget, and tried to not think about any more. Then today one little line, "arrested on West 11th Street" brought it back like a flood.