Try On the Jacket 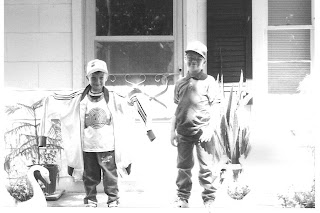 When I got up this morning, I knew it was going to be "one of those days" where I have a bad attitude. I went to bed last night with a split little toenail (I barely have a toenail on that toe, anyway) that started to bleed and I had to bandage it, sticking it out from the covers because even the sheet hurt, and my feet were cold to boot, which put me in a bad state of mind going to sleep. (ha, "to boot.") It could be worse, but I'd like it better.

So I pray my usual short prayer to get started in the morning, all in bad attitude, step out of my bed, and limp to get dressed.

I take the dog out after putting my coffee on. It smells "funny" out. I live in the boonies, so I'm not used to "funny" smells. Almost a chemical smell. I can't figure it out, which gets me to thinking negative thoughts. It's not skunk, cows, horses or even my dog smelling.Not the usual organic smells that I have learned are the "norm." It's something else I don't recognize. I come back in the house. I forgot to put in the thing that holds the coffee filter, so my coffee pot is a mess and what did go through is weak and crummy, full of grounds. I drink it anyway, and read my paper, crunching my coffee. Maybe the smell outside will go away.

My youngest son is a senior in HS this year. He awakened with a sore throat this morning and barely was speaking. I made him some tea and honey and dosed him up with meds and sent the poor kid to school. I'll be thinking of him all day. He is taking an EMS course this year and will learn something else new to rescue someone. Who takes care of those who take care of the world? Now you know. A woman at home with a bad attitude( and a chemical smell outside) who is randomly writing in her blog as she crunches her coffee.

I have four boys who each have a great sense of humor. They can make me laugh when I'm standing on the cliff's edge. This morning in my bad attitude jacket I got to thinking about them and missing how they were always here to drop funny lines and jolt me out of bad attitudes. Now they are in the world talking others out of having bad days. I was just starting to think I had done nothing for the world in my lifetime and that I was wasting away in this "place" (which I have a bad attitude about this "place," too.) But as I watched my youngest slip out the door to make his classmates and teachers laugh another day, even though he felt not-so-good, I realized I'm not in the grave yet and I've got four guys out there brightening their own corners.

That's when I saw this photo. It's of my two youngest boys at my soon-to-be 93-year-old Grandmother's house in Tennessee back several years ago(when she lived at home, not in the nursing home.) Max thought it was funny when my Grandmother gave him this jacket. Instead of getting all out of whack about it, he was laughing. And he always had this attitude that he would "grow into it." So, I suppose I need to try on the jacket of good attitude, laugh that it's too big for me today, but I'll "grow into it." Just accept it.

And with that thought I'm ready to write some more today, me, in my too-big for-me Good Attitude Jacket, shrunk underneath in my Bad Attitude Underwear.
Posted by Crystal Laine at 8:34 AM

The comment that caught me was the thought of you crunching your coffee!!! You must make that Louie LaMore coffee my son-in-law talks about. Strong enough to float a horse shoe.

Well, I'm sorry the bad attitude underwear found you, but I'm certainly glad it left my house!
Hmm, maybe we ought to toss around the notion of someone writing Sisterhood of the Wandering Bad Attitude Panties, or something!
heehee
Carrie

LOL, Sharon, "strong enough to float a shoe" is a riot. I must try this coffee. I need strong coffee--it keeps my heart beating.

And Carrie, tonight (and last night) I was so excited and in a good and positive mood, I hope those underwear stay in a drawer somewhere--at least for a while.

Ah,but we know they'll come out again and get into a bunch once more.

But both of your comments brightened my day.