When I Was Just a Kid...Bonnie Bruno 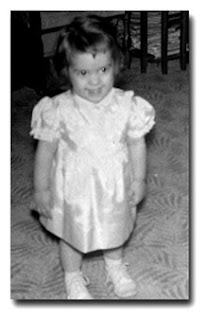 When Bonnie Bruno was three, she "stole" a grape and her dad gave her a penny and made her pay the clerk. It was her first lesson in honesty and the first of many lessons from her parents and older siblings. Bonnie was from a family of 8-is-enough. She remembers for three-fourths of her childhood only having one bathroom. Let's see, one bathroom, 8 people. Bonnie, master of understatement said,"Mornings were interesting, especially when four of us six kids reached our teens."

Bonnie says as a child she decided to surprise her mom and pulled a chair up to the kitchen sink, dumped in a whole bottle of dish soap and tried washing the dinner dishes.

"One by one, they slipped through my fingers onto the floor. She and my dad were so shocked, they thanked me and said they’d been wanting new dishes anyway."

To me this shows just what loving parents Bonnie must've had, and may be why she is such a kind person herself. And Bonnie didn't have a grandmother for long, but she is a doting and loving grandmother. Her dad’s mom died before her parents met, and her mom’s mother died when she was four. But Bonnie learned what it meant to be a grandmother from her beloved weekends at "Grandma" Bessie’s house.

"She was the widowed grandmother of my best friend, and lived by herself on a farm. She taught us how to milk cows, gather eggs, and swing from a rope and drop onto a hayloft."

Bonnie is a gifted, creative writer and photographer. If you have not seen some of her nature photograpy, you are missing a rare and beautiful treat. First, let's get a snapshot of Bonnie's childhood that shaped the woman who can bring poignancy to any small moment of the day: 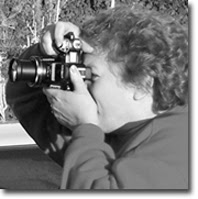 Childhood Ambition: I wanted to become a teacher, a mommy, a writer, a forest ranger, and an archaeologist. I just didn’t know that I couldn’t wear that many hats.

Fondest Memory (then): I come from a large family of eight. Every other summer, we’d take a cross-country vacation—all of us stuffed in a station wagon (I know this dates me) without A/C. Two weeks! My parents were very brave people.

Proudest Moment (then): When I realized I could read all by myself. I was four years old and my third-grade brother, Ted, taught me the alphabet and all the letter sounds. Every afternoon after school, I’d ask him to teach me how to read his book, and he finally got tired of me pestering him. He gave me the book, told me to practice, and that’s what I did—under my blanket every night with a flashlight.

Biggest Challenge as a child or teen: Finding time alone with a parent. Our household of eight was like a freeway interchange.

My First Job: I worked part-time for an insurance broker who talked nonstop about his state business awards. I left the office every day with a headache.

Childhood Indulgence: Chocolate milkshakes so thick, the straw stood up by itself

Favorite Outfit as a Child: A white dress with an orange butterfly print, which my dad bought for eighth birthday. I liked how the skirt twirled when I spun around.

Favorite Childhood Book: Angus and the Ducks, by Marjorie Flack. This is the very first book I learned to read myself (borrowed from my brother). Later, I found it at the library, and was amazed to learn that the author had written other books. It was the first time I thought about how real people write the books we read—it’s all about good ideas. When I was in my forties, I looked everywhere for a copy of Angus and the Ducks, and couldn’t track one down. My husband Nick found one at a used bookstore for me. When mainstream publishers began bringing back some of the classics from the fifties, Angus and the Ducks resurfaced.

Childhood Hero: My brother Gary, who accidentally shot a bird with his new bb gun and cried when it fell to the ground. He works as a charge nurse for a busy ER at a California hospital – no surprise, because of his compassionate heart.

Nicknames as a child? My mom sometimes called me Birdy Brain because I’d daydream and would lose track of what I was suppose to be doing.

Favorite Activity as a Child: Playing in the orange orchard behind our house with my two older brothers. Our imaginations ran wild, and we’d build forts or tiny “farms” in the dirt with popsicle sticks, sprigs of plants for miniature trees, plastic farm animals, and a garden hose for irrigation. It was life in miniature. Now I capture life through macrophotography—nature up close. I look for “hidden treasures” that sometimes go unnoticed because we’re in such a rush, it seems.

From Bonnie's web site:
Bonnie Bruno has been writing professionally for 27 years, specializing in children's books, articles, columns, and stories for both the inspirational and general marketplace. Her work has been published over 450 times in 40+ different magazines and newspapers, and she has written books for Zondervan, Standard Publishing, Cook Communications, Intervarsity Press, and No Starch Press.

She sold her first two stories to a children's magazine while she was a student at The Institute of Children's Literature, and returned many years later to join their faculty as an instructor. A former family computing columnist for Newsday (1997-2000), Bonnie has also written technology-related columns for ParentLife and Living with Teenagers magazines.

Her love for variety led her to work with several greeting card companies, where she produced 150 greeting cards, posters, postcards, calendars, and gift items. Her cards have appeared on the retail racks of Hallmark, Oatmeal Studios, Paramount Cards, and Argus Communications.


These days Bonnie is a nature photographer as well as a writer,though she is mostly pursuing the photography. If you would like to have the Photo Buffet on your web site or blog, look at the logo to the right and click on it to download the widget.

Her main writing/photography website
And you will be blessed when you stop in regularly to Bonnie's blog, Macromoments (one of my personal favorites) 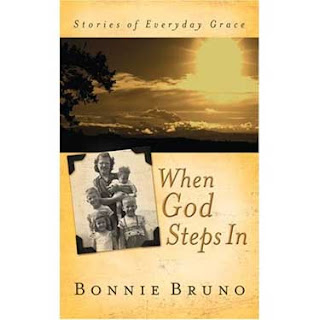 When God Steps In: Stories of Everyday Grace,Standard Publishing.

Bonnie says: "It has been a great experience, and God has grown the e-zine by leaps and bounds into a special ministry. The founder/editor Darlene Schacht has a keen eye for detail and has pulled together a unique group of writers." Take a look at Bonnie's column and look through this ezine (see the cover to the right.)

Bonnie, who is open about her experiences in publishing, shares:
Light & Life will be publishing several of my photos for an article about the life of a vineyard, written by the son of a vineyard keeper. It will be in the November/December issue of LLM. I spent a full year gathering photos of the different stages of vineyard growth for this assignment, which ties in with the Scripture passage about 'I am the Vine, you are the branches...' It was a good reminder for me as I worked--a blessing."


And do you have kids? Take them to Bonnie's WonderKorner: Where Education Meets Fun! 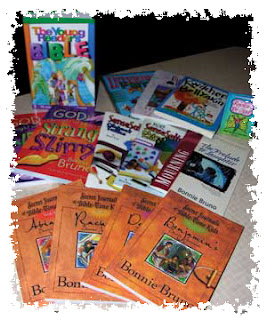 Do you need to find a quote? Here's Bonnie's reference page.
Posted by Crystal Laine at 5:19 PM

Great article about Bonnie. It's fun to catch of a glimpse of Bonnie as a child. I too come from a family of 8 children with one bathroom. Yes, interesting is one word choice.