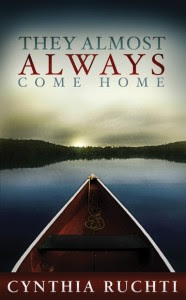 Libby and Greg flail in the 20-year-plus marriage after the death of their daughter, Lacey. Greg heads for a solo canoe trip in the Canadian wilderness. When he doesn't return home on time, Libby; her father-in-law, Frank, and best friend, Jen, decide to look for him.

Tenderfoots Libby and Jen and seasoned Frank all struggle with their own faith as they fight for their lives, searching for Greg, as Libby gets to know her husband through his past wilderness journeys.

This book is a page-turner full of adventure, rich characterizations, and spiritual revelation. Readers will need to keep tissues handy. Discussion questions at the end make it suitable for book groups. This is one of my favorite books so far this year, and I highly recommend it to women over 30.


About the Author: Cynthia Ruchti

Cynthia Ruchti is the current president of American Christian Fiction Writers (ACFW), which she’s served in various volunteer capacities since shortly after she became a member in 2002. In her role as president of ACFW, Cynthia writes a monthly “From the President” column for ACFW’s Afictionadoezine. For two years she was one of four humor columnists for Afictionado’s“Let There Be Lite.” In 2007, she was the recipient of the ACFW Member Service Award. In 2008, Cynthia won second place for Women’s Fiction in ACFW’s prestigious Genesis Contest.

Thank you so much, Crystal! Your assessment means so much.

I'm looking forward to connecting with your readers.

How delightful to have you, Cynthia, to check in.

Do any of you have a question about Cynthia's book, her writing or ACFW? :)

Do check the links in the post and give her book a read.

Cynthia, did you conduct any on location research? How did you get the information for your setting?

will have to check it out!

if all go right, should have my copy next week :)

Wow, Jel! You're speedy! Thank you so much, everyone, for the lovely comments.

check out my jelspeaks blog
too see what i said about it
hope ya don't mind, what i said . :)