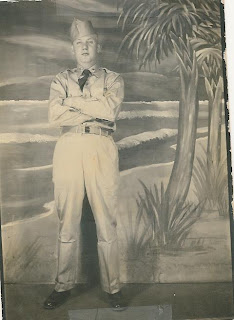 (My Dad, in the Army during the Korean Conflict, about 18 years old)

There are so many thoughts and memories for me tied up in Memorial Day. We used to go to Tennessee and camp along the Tennessee River about this time of year, as soon as we got out of school. We'd listen on the radio to the Indianapolis 500, a track that my dad worked on as a dump truck driver before I was born. When I was pregnant with our second son, we lived in Speedway near that same track and my husband worked on the emergency med crew at the 500. We also spent many years going to Aunt Carolyn and Uncle Ronnie's house (my husband's family) on Memorial Day for the best BBQ and fellowship a family could have.

We have many family members who served in the wars that America has been in. We remember their service and are thankful that many of them came back. My Uncle Pat Warren was on a ship at Pearl Harbor that went down. He was in the water for hours. I didn't hear this story until recently. I just knew him as Granddaddy's brother who made great hamburgers and shakes and cherry Cokes at his restaurant in Tennessee, Pat's Drive-In. His mother and sisters heard about the bombing at Pearl, and prayed for him. They had no idea if he was dead or alive, but his mother was just sure he was alive. He was.

Here's a photo from the Tomb of the Unknown Soldier. In honor of our many fallen soldiers, as well as the ones who continue to serve, I thought you might be interested in some facts about it. 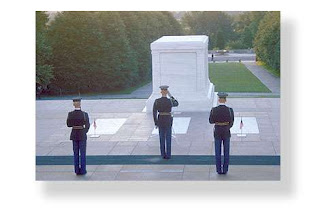 Why do we guard the grave of an Unknown Soldier? (See this link)

3. It takes 21 steps to complete a round. The 21 steps refer to the twenty-one gun salute, which is the highest honor given any military or foreign dignitary.

4. The Sentinel does not execute an about face. He stops on the 21st step, then turns and faces the Tomb for 21 seconds. Then he turns to face back down the mat, changes his weapon to the outside shoulder, counts 21 seconds, then steps off for another 21 step walk down the mat. He faces the Tomb at each end of the 21 step walk for 21 seconds. The Sentinel then repeats this over and over until he is relieved at the Guard Change.

5. The Sentinel's gloves are wet to improve his grip on the rifle.

6. The Sentinel is changed every thirty minutes during the summer (April 1 to Sep 30) and every hour during the winter (Oct 1 to Mar 31). During the hours the cemetery is closed, the guard is changed every 2 hours. The Tomb is guarded, and has been guarded, every minute of every day since 1937.

7. The average tour at the Tomb is about a year. There is no set time for length of service. The Sentinels live either in a barracks on Ft. Myer (the Army post located adjacent to the cemetery) or off base if they like. They do have living quarters under the steps of the amphitheater where they stay during their 24 hour shifts, but when they are off, they are off.

9. There is the "clicker" in the shoes worn by Sentinels. It is a shank of steel attached to the inside of the face of the heel build-up on each shoe. It allows the Sentinel to click his heels during certain movements. If a guard change is really hot, it is called a "smoker" because all the heel clicks fall together and sound like one click. In fact, the guard change is occasionally done in the "silent" mode (as a sign of devotion to the Unknowns"). No voice commands - every thing is done in relation to the heel clicks and on specific counts.


10. Each Relief (team) has a rotation during the 24 hour work day. This rotation is dependent on the number of Soldier-Sentinels who are proficient enough to guard the Tomb. The standard is 3-4 qualified Sentinels, 1-2 Relief Commander/Assistant Relief Commander, and 1-2 Sentinels in training. Generally, the Sentinel will be on guard duty for a tour and have two tours off in between - then go out for another tour. However, in extreme cases, Sentinels have been known to go back-to-back for the entire 24 hour shift.

11."The Box" next to the tomb is used primarily during wreath-laying ceremonies for the Sentinel to retreat to while flowers and Taps are being presented. There also is a phone with a direct line downstairs to the Tomb Guard Quarters - this is used in times of emergencies or just to notify the next shift of something.

12.We didn't guard the Tomb in the 1920s. People often came to the cemetery in those days for picnics during which time some would actually use the Tomb as a picnic area (probably because of the view). Soon after, 1925, they posted a civilian guard; in 1926, a military guard was posted during cemetery hours; and on July 1, 1937, this was expanded to the 24-hour watch. Since then, the ceremony has developed throughout the years to what we have today. Today, most of the challenges faced by the Sentinels are tourists who want to get a better picture or uncontrolled children (which generally is very frightening for the parent when the Soldier challenges the child).

13. The remains of the Vietnam Unknown Soldier were exhumed May 14, 1998. Based on mitochondrial DNA testing, DoD scientists identified the remains as those of Air Force 1st Lt. Michael Joseph Blassie, who was shot down near An Loc, Vietnam, in
1972.

It has been decided that the crypt that contained the remains of the Vietnam Unknown will remain vacant.


14. The Sentinels do not let guarding the Tomb in inclement weather bother them.
because,they consider it an honor to stand their watch ("walking the mat".)


15. The Tomb is guarded 24 hours a day, 7 days a week. There has been a Sentinel on duty in front of the Tomb every minute of every day since 1937. And the Sentinel does not change the way he guards the Tomb, even at night when there is no one around. The Sentinels do this because they feel that the Unknown Soldiers who are buried in the Tomb deserve the very best they have to give.

16. Only 3 Sentinels have been female. (from this source.)


I honor the soldiers, past and present, of the United States Military today.
Posted by Crystal Laine at 6:05 PM