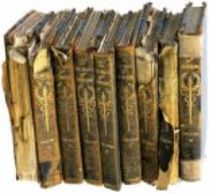 I'm far behind in listing my 1000 Gifts. One of them that probably takes up at least 100 places is that my oldest son's friend, Tyler, fixed my computer problem. See I could not open Word, and to a writer/editor, that is like the worst thing ever to happen. Turns out there was some sort of "corruption" in the program. He can fix stuff even the professional geeks couldn't fix. Tyler, I'm sure, is headed to the top in his field. He is amazing.

My four boys have good friends. They are wise in choosing such people as those they hang out with. Each one has friends who have gifted us over and over with their manners, friendliness, humor and just being one of "us." That is such a great gift.

As we close out the year 2006, our country is mourning a president whom we did not ask for--we didn't vote for him--but in God's grace to us, we were given a great gift for our country. Gerald Ford brought qualities of steadiness, friendliness, humor, and strength when we teetered on losing our faith. Pat Oliphant had a great story on Gerald Ford in his political cartoon he published after they announced Gerald Ford's death. It is a story that I suspect was typical. Ford took much criticism in the days following his step into office, but he took it in stride. He had to face many things within his family as well as with an entire nation. I have admiration for a man who still could laugh at himself when things were very tough. It is something I probably admire most when I see it.

Now, I have to go get ready for all the family coming to my house tonight! I can hardly wait, but I need to finish some preparations! In the coming days, I will be praying and thinking about my goals for this year--and for once accomplishing a few of them. Since giving up teaching, I have been flying by the seat of my pants on "goals" each year. This year I get back to lesson plans--for a classroom populated by me.

Take care and see you next year! And if I don't see you here--I hope to see you THERE.
Posted by Crystal Laine at 1:22 PM

Glad your computer is back up. Kudos to Tyler! And nice job on the comments about President Ford. Now for a question from left field: what are those books in the photo? You are the photo queen!

Yay! Your computer is recovered!

Did you ever make those Swedish cookies? I think I'm going to try them. They look good.