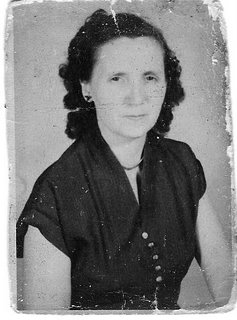 The century was just gearing up when she was born. The farm where she was born is still there in Tennessee and owned by family. If you take a short hike up to the top of the hill, you'll see the family graveyard where generations of my family have been buried. It is still maintained by the family. "Decoration Day" is still in July, and is still considered a family reunion, of sorts.

Her tombstone, which she will share with my grandfather upon her death is already in place with her name, only lacking the date. She had it done when my grandfather was buried back in December of 1972. If you walk down to the bottom of the hill, and across the road, you'll see a creek running out of a cave. It is ice cold and has a rocky bottom.

As a child I remember having the family reunion there,walking up to the family graveyard for "decoration" of the graves, and then, coming back down to eat a sumptuous country spread brought in by aunts and grandmothers, most I recognized. Hugs were distributed widely.Everyone seemed glad to see us. We belonged. Watermelons cooled in the cave with soft drinks. A dipper was hung on a post by the stream, and you grabbed it to drink from the stream as the water rippled out of the cave. Since this is in July on the border of Mississippi/Alabama, it would be so hot, you were drenched in perspiration before you even got out of the car. That coldwater creek was pretty inviting for the young, and probably brought memories for the adults. And Pauline was so familiar with this place. It was "home."

Pauline was child number four of the eight children of William James "Dad" and Sallie Mae (Warren) Pulley. All the others are gone now and she is the only survivor. Her granddaddy was a colonel in the 19th Cavalry of the Confederate States of America. He is buried on the hill.

Each one of my Grandmother's brothers and sisters had nicknames. I don't know who gave them these nicknames or why. Most of the time nicknames have something to do with personality or events in that person's life. You be the judge, as I'm going to share their given names here with you with the nicknames in parentheses. My grandmother's name is Pauline, but I can remember people calling her "Top." Interesting enough, most of these were called by their middle names, instead of the first names, but nicknames won out amongst those who knew them. Some of these people I didn't even know what their real names were until I was a teenager.

The youngest brother, "Ton," was a good friend to my dad. Ton died from cancer young. I don't remember anyone saying what kind of cancer it was. Maybe it could be cured today. I remember being close to his son, Donald,who was just a little older than I was, and Ton's wife, Ida Dean. These people were special to my dad and mom.

Grandmother had five children and all but my dad are still alive. They all still live in the county where she was born,generations of my family, kids, grandkids, great-grandkids, minutes away from her. She's had five generations photos taken with some of those people. My dad was the only one to leave Tennessee, and never return to live there. He was not buried there. They all had to come here, as he bought a grave site for him and my mother before they died. I have a cousin who ventured to Nashville and stayed. Another cousin lived in Marietta. Georgia, but she now lives back from which she came.

While my grandmother has traveled to Florida, Alabama, Nashville, and to Indiana, most of her life has been spent in the same area where she was born nearly a century ago. Her second husband wanted to live in Florida where the fishing was great and some of his family stayed, but she would not sell her house, and insisted on coming "home." The pull of family and a place to call home is strong in this part of our family. "Miss Pauline" or "Mama" is at home where she lives. The only other place these people would want to be is heaven, and only when their time here is done.

Now she plays Bingo a couple times a week(she has money just for that.)Receives guests in her room. She will go today and get fish at a restaurant called Bradley's where everyone knows her. She'll be in bed by 7 p.m. She has survived much, and is now winding down. But she will always be my "Mama" and it is comforting to me that there is this place in Tennessee where I belong just because of my family there.

Happy Birthday, Grandmother.
Posted by Crystal Laine at 11:30 AM

What a delightful tribute to your grandmother.

This is so pituresque! In my mind's eye, I can see the cave, the watermelon, the hill, and the decorated grave markers. Thanks for sharing with us and for painting such a beautiful picture of home and family.

Happy Birthday to your Gram! And like Terry said, what a great tribute.

A very Happy Birthday to your Grandmother!