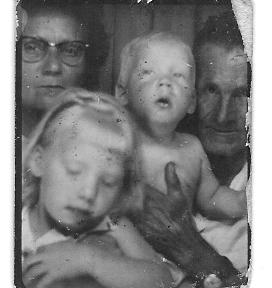 Memories of Grandmother and Tennessee

(on the day before her 92nd birthday)

Nothing was better than going to Tennessee to visit my grandparents. My mother's parents were both dead and my dad's parents had been my parents when they needed to be. I'd be shaking, I was so geared up to go visit them. It would take hours on curvy backroads and narrow highways back then to reach Tennessee from Indiana.

When we would come "in" from Indiana on vacations and holidays, it would be pre-dawn because my dad liked to travel at night. When we'd hit the curvy roads after Nashville, I'd always get car sick. As we descended into the valley (and yes, it's part of the Tennessee Valley,)my ears would pop. I would be so excited I couldn't sleep in the car. I would lie on the back seat or on the floorboard of the car, listening to the Nashville stations croon country songs and occasionally my parents would talk. I'd think about the people I would see once we got there and lace all of my memories together into neat little stories in my mind.

By the time we reached my grandparents' house, Grandmother would be excited, too, so she would already be up, cooking. She'd tuck my brother and me under quilts she'd made, so heavy, that we sunk under them into the feather mattress and wonder if we'd be able to breathe. Then, the adults would sit around the kitchen table talking and drinking coffee. It was soothing to drift off to sleep for a few short hours until the sun came up, listening to their gentle voices. Those were the best times of my life when we'd go to Tennessee to see Grandmother and Granddaddy and all of my family. I wanted to live there with them so much, it hurt. And I'd cry for miles when we'd leave to go home.

Grandmother loves to fish, though she can't do it anymore. That was also part of "going home"--camping on my Uncle's lot along the banks of the Tennessee River and heading out to fish from there. Granddaddy had rigged up an old school bus with beds and supplies and parked it there so we could stay all week. My dad would have a boat put into the water, and he pulled up to the dock there. Grandmother could fish as well as anyone. In the evenings, she liked to play a card game called "Rook." We'd have sweet tea, hush puppies and whatever fish that had been caught (and we always had plenty of fish.)

For breakfasts we'd have eggs, bacon, ground sausage, biscuits, country ham, gravy, peaches and my favorite, just for me--pear preserves. Eating was a big part of the gatherings. Dinners would bring dishes from the others in the family and the table would be trembling under several meats,cornbread stuffing, vegetables, cole slaw, banana pudding, creamed (mashed) potatoes, cornbread and plenty of Cokes and sweet tea. There were always Cokes. And she kept candies in a dish in her living room. Mostly, I remember the peppermints and the orange "slices" that were like jelly beans with a sugar coating.

She sewed many of my clothes. I remember one year she made me several outfits from dark green material, purple material and purple plaid material that we picked out before I left to go home. I was the first in my junior high to have the new "gaucho" pants. I thought those outfits were wonderful and everyone asked me where I got them. She also made quilts. All of us have quilts that she made. My wedding quilt has appliqued large red cabbage roses on a white background. She made extra heavy ones for my dad to carry in his truck for his bunk to keep him warm.

My memories flood me this week of Tennessee and my grandmother. While some of my memories here in Indiana were not always pleasant, and life was tough, memories of Tennessee and my grandparents and relatives during that time are all like icing on cupcakes. Sweet and lingering, treasured in the good part of the brain. That is where I will I keep them.
Posted by Crystal Laine at 11:37 PM

Cris- I love this. Makes me miss my Nell. I was just today asked how I came to say "y'all" seeing how I'm born & bred in Chicago. That's my Nell.