Book It Monday: Reflections of a Stranger by Linda Hanna and Deborah J. Dulworth

Linda Hanna and Deborah J. Dulworth, friends with a common interest in writing, decided to plot and write a book together. Now we can read it! It's almost golf season and since it's a little slow in Indiana weather-wise to golf, you can read this book instead where the main character is married to a golf pro. They are working on the next one, too.

Reflections of a Stranger
by Linda Hanna and Deborah J. Dulworth

Cora and her husband, PGA golf pro Steady Eddie Timms, live in a safe gated community, so when Cora witnesses a murder, she's shocked and frightened. But without a body, murder weapon, or evidence of a crime, Cora's sanity is called into question-especially when it comes to light that Cora's not been dealing well with the stress and grief of losing a daughter, and her memory of late hasn't been all it should be.

Determined to prove her sanity, Cora bursts into a flurry of danger and unanswered questions as she sets out to find evidence of foul play. With the help of a bumbling security guard, a loyal best friend, and a neighbor's yappy dog, pieces finally fall into place.

By all appearance, the mystery is solved...until Cora is kidnapped and implicated in a case of hidden identity and an old embezzlement scheme. It will take more than the national attention garnered from Steady Eddie's status to clear Cora's name, rescue her from the kidnappers, and help find her way back to the peace and sanity found only in God's loving arms.

If you love a good, suspenseful mystery, go get Reflections of a Stranger by Linda Hanna and Deborah J. Dulworth. 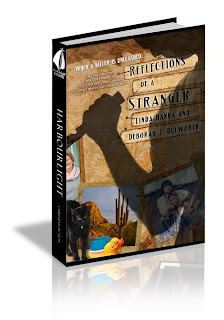