I am deeply honored to announce the release of the ebook, Shadowed in Silk by Christine Lindsay. If you prefer the print book, it will be released later this year (set for September 1st,) but if you cannot wait for this sweeping story of love, honor and revolution, then do get the ebook!
Because I have known Christine since early in her writing journey, I know her writing, yes, but I also have learned of her heart and the stories she has in her life that give such depth and rich characterizations to what she writes. I asked her some questions so you, my friends, could also know more about the heart of Christine Lindsay.
Christine shares about how she first felt the call to write not long after reuniting with her birthdaughter, Sarah. (This also plays into the cover art of Christine's book, Shadowed in Silk.)

Crystal: Tell us a little about the journey of this particular book. What kinds of God-incidences happened and why is this book, besides being your debut, extra special?:
Christine : The call to write came to me about 12 years ago after I was reunited with my birthdaughter, Sarah. She was my first child, and I had relinquished her to adoption when she was 3 days old. Sarah was 20 when we reunited. God had been so kind to me after I gave up Sarah. He brought the most wonderful man into my life, and blessed my empty arms with 3 more children--kids that I could keep for my very own.
But after my reunion with Sarah I began to relive the original loss of giving her up. The Lord very clearly told me to write out my pain, and after a while Sarah became the muse for my fictional writing. But the journey to grow close to my birthdaughter, and to becoming published was a long and difficult road.
Each time I thought of giving up though, God would do something to encourage me, not only in my growing relationship with Sarah, but also in my writing. He sent fantastic writing mentors  to me, like Crystal Miller, whom I dearly love though we've yet to meet in person. One year the Lord arranged for me to win a scholarship to the ACFW conference. And in 2009 He astounded me with the 2009 Genesis award in the historical category.
So though it was hard, He never let me quit. And neither did Crystal. Her editorial critiques were so instrumental in Shadowed in Silk being published.
One of the most exciting moments was when WhiteFire (Publishing) and I discussed models for the front cover. Off-the-cuff I suggested that my birthdaughter might resemble my main character. WhiteFire loved the idea, and in a short period of time it was  arranged. It was a hoot arranging the costumes. And Sarah is wearing the sari material I bought in India on a missions trip.
The photo shoot all happened so fast though. It wasn't until later that it dawned on me that our tender-hearted Heavenly Father had tied up the details of my life in such a perfect way.
And all of this was taking place during one of the happiest periods of my life--as I helped my precious daughter Lana prepare for her wedding. It seemed as if God wanted to answer a whole bunch of prayers for me all at once. He left me breathless.

[Read about Christine and Sarah on Christine's blog.]

Crystal: What’s your favorite part of writing a book?
Christine: Once I've done the hard work of nailing down the first draft, I love the re-writing part, and the re-writing, and the rewrit..... I guess I like polishing.
Crystal: When the well runs dry, how do you recharge your creative energy?
Christine: I'm useless without the Lord. So I either grab my Bible and spend time in prayer, or I go out for a prayer walk to blow the cobwebs away. Or I take a break and read someone else's work.
Crystal : Do you keep regular hours in writing? What’s a typical day when you’re writing?
Christine:At the moment I still work part-time outside the home. But I hope this will be changing soon. On a typical writing day I keep a tight schedule. I have my devotions with a cup of tea at about 7 am, quickly check my email for anything urgent, and then dive into the writing. I need to start writing in the morning. By evening I'm beat.
Crystal: My writing world would be perfect if only….
Christine:...I didn't have to work outside the home. I find it hard to jump into my fictional world unless I can start fresh at it every morning.
Crystal: My best ideas come from…..
Christine: ...My husband, David, is a wealth of brilliant ideas. So much of the military stuff in Shadowed comes from him. He suggested the whole rifle theft idea, and how that sort of theft from a garrison could be arranged. David also goes out and finds me great research material. When we're out driving he helps me unravel plot problems.

Crystal: What do you know now in writing that you wish you had known in the beginning?
Christine: That it takes a lot longer than most of us think to become published. It's been 12 years for me to get to this point. And getting published isn't necessarily a true evaluation of your writing ability. And oh yes, get connected with other writers. Writing is not a solitary business. Join a group like ACFW.
SHADOWED IN SILK
She was invisible to those who should have loved her.
After the Great War, Abby Fraser returns to India with her small son, where her husband is stationed with the British army. She has longed to go home to the land of glittering palaces and veiled women . . . but Nick has become a cruel stranger. It will take more than her American pluck to survive.
Major Geoff Richards, broken over the loss of so many of his men in the trenches of France, returns to his cavalry post in Amritsar. But his faith does little to help him understand the ruthlessness of his British peers toward the Indian people he loves. Nor does it explain how he is to protect Abby Fraser and her child from the husband who mistreats them.
Amid political unrest, inhospitable deserts, and Russian spies, tensions rise in India as the people cry for the freedom espoused by Gandhi. Caught between their own ideals and duty, Geoff and Abby stumble into sinister secrets . . . secrets that will thrust them out of the shadows and straight into the fire of revolution.
About Christine:
Christine Lindsay writes historical Christian inspirational novels with strong love stories. She doesn’t shy away from difficult subjects such as the themes in her debut novel SHADOWED IN SILK. Christine’s long-time fascination with the British Raj was seeded from stories of her ancestors who served in the British Cavalry in India. SHADOWED IN SILK won first place in the 2009 ACFW Genesis for Historical under the title Unveiled.
The Pacific coast of Canada, about 200 miles north of Seattle, is Christine’s home. It’s a special time in her life as she and her husband enjoy the empty nest, but also the noise and fun when the kids and grandkids come home. Like a lot of writers, her cat is her chief editor. 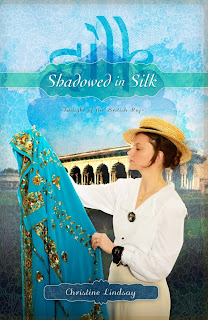 Crystal, thank you so much for having me as a guest. You've been such a part of my writing journey and that of Shadowed in Silk. I hope the book brings readers a fraction of the joy you have brought into my life. Love you, dear friend.

I love your book, love the photos, love YOU. I recommend this book to all of you who stop by--you won't be sorry.

Christine writes in my favorite genre--historical--and she does it well.

Keep writing, Christine! And be sure to pick up her book in September if you can't do the computer ebook. :) I'll remind everyone.

Wow! What a great story. And I'm looking forward to reading the novel. It sounds fabulous and the cover, and the model, are lovely.

Thank you LeAnne. Yes the model is exceptionally pretty. So much so that when I was reunited with her, I was rather disconcerted. I'm not the most photogenic person to say the least. :o) But God has been so good to me. I thank Him everyday for the wonderful children He has given me. He is such a good Father.