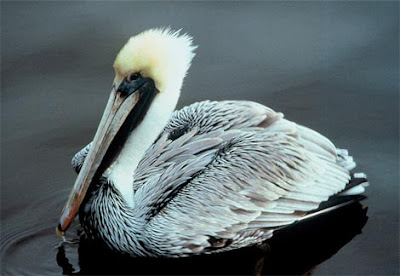 I've always been a bird watcher, due to my mother's influence. We had tons of bird identification books, and since I also loved to sketch, I drew tons of bird pictures. I can't keep descriptions or tie-ins with birds out of my fiction. It's as much a part of me as anything else. Plus, it keeps me tied to my mother, who died in April 1997.

So, I have been doing some more reading about birds and came across an obscure tidbit that Dante referred to Christ Jesus as "our pelican." That's weird! Have you ever seen a pelican? It is not exactly the kind of bird you depict with Christ. Ok, so then I came across more referrals to pelicans being the symbol of Jesus's resurrection as I dug.

Certainly the Bible refers to birds often. The birds we most often think of are eagles and sparrows. But pelicans are often emblazoned on ecclesiastical coats of arms and in religious paintings. If you are an art lover, you will find them. (Go on a pelican search in your art museum.)And then there's the Mighty Dante talking about "Christ BEING our pelican." Why would he say that?

Here's the story: The name "pelican" comes from a Greek word for "axe." Because the pelican had a very large beak and uses it to fish, as well as in diving for fish, (using it like a net) their behavior was quite a picture for an observer. The pelican ejects the water and swallows the fish for its own nourishment .The pouch doesn't keep the fish for long, but during nesting season, it also becomes a "school room" and place to feed the chicks.

This next part is gross, but no one says that the story of the cross is pleasant, either. Pelicans also use that pouch to hold regurgitated fish soup to feed their chicks. The chicks have to DIVE into that pouch (their first lessons in survival) which is against the chest of the pelican. This is where the legends were born in observing this behavior. It must have been alarming to those who first witnessed this. Since the pelican will pluck the feathers from its own chest for the nest, it has a bloody chest during this time. In medieval religious folklore the pelican fed her young with her own blood, by plucking those feathers from her breast, and "reviving" the chicks after they drowned in the pelican's beak. It seems that those chicks were believed to drink the blood of the self-inflicted wound on the pelican's breast.

It is certainly a painful process. In this story the chicks die (in the mouth/tomb of the parent) but are brought back to life (3-days later) by that self-inflicted wound on the chest, by allowing them to drink the parent pelican's blood. That correlation is how the pelican got into all those religious paintings, on family crests for Christian piety and into works by Dante. The pelican became a lesson, a symbol, for Christ's resurrection from the dead.

That's some legend! And some picture. But it's not unusual for humans to use birds to teach us lessons about life. The pelican story illustrates one of the most awesome stories in human history. It takes faith for those chicks to dive into the mouth of a mother pelican for sustenance. It takes faith for one of us to believe that Jesus deliberately took the wounds inflicted to die on a despicable cross just to pay for our sins and revive us from eternal death. That was too much to ask, wasn't it? But not if you wanted survival of a species more than anything--and that pull was way stronger than Jesus wanting to save himself. Three days later Jesus would rise up from the dead and that was it! We were nourished for eternity.

If you haven't embraced Jesus and his story, then think about how God gives lessons of Him and God's grace in the nature all around us. Remember the pelican today and during the Lenten and Easter season. And remember that God has lessons for you all around.

This is extremely interesting. Thanks for sharing!

That is fascinating. It always amazes me what intricate details the Lord has woven into His creation. It all speaks about Him. Great post.