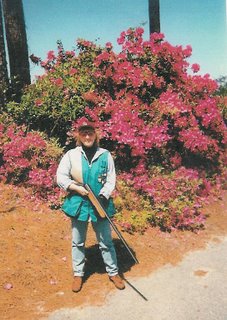 My favorite place in the entire world, other than Indiana and Tennessee, is Savannah, Georgia. This is me in some distant past February in Savannah. I was at a regional championship trapshoot competing, and while my walk on the beach without my shoes was pushing it (it was a might chilly, but doable,) I couldn't get over the azaleas at the gun club entrance. At least I shut my mouth long enough to take the photo. (And later would stuff my mouth with Savannah cuisine and pralines.) Most of the places I've been to are related to trapshooting. Most of my life has been not too glamorous. I always want to look like the Audrey Hepburn of life; instead, I come across more like Harlow Hickenlooper.

We had just left a blizzard in Indiana. I didn’t think we were even going to make it out of the state. So, I had to have my photo taken there because even on a good day in Indiana, I had never seen such a profusion of colorful flowers. I felt even a bit glamorous. This is as glamorous as I get, though. I have to have God's glorious creation backing me up to get a good "glamour" shot.

Some people see shooting sports as glamorous. I have hung out with and shot with the rich and famous, it’s true. While eating a greasy hamburger in the clubhouse between rounds, I listened to my shooting companions talk about the best places to fuel up their private jets. And my Italian-made shotgun is considered "sexy" by others in this sport. The Italian craftsmen, who hand-designed and made my gun, are swoon-worthy. (They come over from Italy during The Grand American Championships and take care of any problems you are having with your gun, so I have actually talked to them. My goodness is all I have to say about them.)

The first time I ever shot trap targets, I knew it was a sport I was going to like. But trapshooting has never been glamorous for me. It is a "rush" to powder a clay target flying through the air. But this shot of me right before going out to shoot is the best I look all day. After shooting, my cheek or shoulder could be bloody or bruised,sweat soaks through my shirt and gun grease decorates my sleeves. It's not pretty.

When I first started shooting, it was hard to remember everything: put in your earplugs, put on your shooting vest, put on your eye protection, bring your box of shells, keep track of how many times you shoot, shoot on your turn, after five shots move to the next station, look at the target, don’t call for the target until you’re ready, call only on your turn, stay still while others shoot, keep your gun open at all times until it’s your turn to shoot, breathe easy, look over the gun, look over the traphouse, don’t pull the trigger until it is in your sites--and, well, phew, there is a lot to remember. But eventually it became second nature to me.

But at the time I started shooting, I didn't see a lot of women. I wore a vest too big for me, because it was a man's vest I'd borrowed, along with my gun, which was also too big. My cheek was beaten to a bloody pulp with a knot on it the size of a baseball, because the gun stock was too high and thunked me each time I pulled the trigger. I could barely hoist the gun up to my shoulder, which caused me to lean back. It was a wonder whenever I did hit a target--which I hit enough times to keep me coming back. So, after each practice session, I was a mess, but determined. Since you load one shell at a time into the gun barrel, each time I opened to load, a bit of grease would smudge on me somewhere. I ruined several shirts and jeans that way.

A lot of men shoot in this sport, of course, and some have been shooting since they were small boys. I had only shot a gun twice—and both times were handguns, not a 12-gauge shotgun. Some of the men I met were WWII, Korean Conflict or Vietnam veterans, and they had been hunting all of their lives, too. They had forgotten more than I even knew about shooting. I looked clunky and slow, I'm sure. I was a bit of a novelty, too, but wasn’t an Annie Oakley. It was hard work for me. They all had advice and gave it out freely. Talk about the most confusing time of my life.

“Hold your gun higher.”
“Hold your gun lower.”
“Close one eye to focus.”
“Whatever you do, keep both eyes open.”
“Use a longer gun. Use a heavier gun.”
“Use a shorter gun. That gun is too heavy for you.”
“Wear a vest to hold your shells. Get plenty of padding in the shoulder.”
“I never wear a vest. Get one of those belts and get a shooter's tee shirt.”

One time early on I was practicing on a particularly hot day. I don’t know where my husband had gone, but I was left on the field to shoot practice. I’m sure I was frustrated. In those early days of shooting, I was always frustrated. I wanted to do better. I just knew I could be good at this. And I really liked doing it.

This older man had been sitting on the bench watching me. Because it was so hot, my face was not only flushed with the heat of the day, but also from the gloves and long-sleeved shirt I had on to protect me from the now-heated barrel. Sometimes the barrel gets so hot, you can suffer burns. I already had some blood seeping through my shirt at the shoulder, and I was sweating--there's no dainty way to put it. My hair stuck out everywhere, even though I had pulled it back and stuffed it under my hat. My cheek was swollen and bruised. Arms and shoulders ached. I had lifted that gun over 500 times. It ain't a sport for the puny.

Dehydration becomes a problem, so you have to make sure you get some shade and some water between rounds. I walked back to my bag and the bench where the man was sitting and relaxing. I was braced for whatever advice he was going to bestow on me, because they all did that. This one spat on the ground before he spoke.

"You know, honey, this ain't no glamour detail."

I don't know why, but I thought of David when he had put on all that armor King Saul loaded him up with when little David said he was going to battle with Goliath. I was thinking to myself, I wonder if anyone pointed that out to David, right before he dumped all the armor and said, "I got this slingshot and I'll get some stones on the way..."

"Frankly, Scarlet, you're a wimp. You know, dahling, this ain't no glamour detail, this wah-r, and all."

I didn't know what to say. Usually when someone offered me unsolicited advice, I would say, "Thank you," and then would go on, ignoring the man in my face at the time, and keeping the advice from my coach firmly in my brain. This was something I just wasn't prepared for at the time. I'm surprised I didn't spit my water all over him from the shock.

This is the Blue Plate Special for Mondays. I'm having trouble again posting. Drat.
Posted by Crystal Laine at 6:45 PM

Crystal, I am so impressed. If you've gone through all of that bruising, sweat & blood for trapshooting, I know you have the determination to find your place in the writing world :-)

I love your stuff, Crystal. You have a great voice. Keep up the good work.

I'm impressed also! I know what it's like to trapshoot (I've only done it a few times for fun, not in competition, and I wasn't really all that good at it) and it ain't no easy thing to do.

As for the glamour detail. I've learned that it's what makes YOU FEEL glamorous that matters. Regardless of how others feel about it.