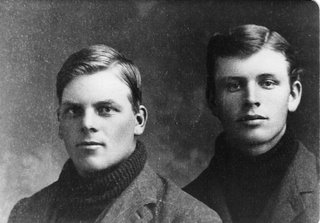 The Story of Coming to America


See any family resemblance? Me, neither. But yet, the guy on the left is my mother's father, Aaron, and the young man on the right is his brother, Oscar. They were born in Sweden. They came to America with their father, mother and six sisters in the late 1800s.

Their father, Jons Persson, was a fancy baker by trade and came to work for the American ambassador to Sweden in the late 1800s, who then made sure they came to America. They first came to New Sweden, Maine, but many of the family ended up in Minnesota and the San Joaquin Valley in California. Jons was hot-tempered and harsh in nearly every story told by people who knew him, or who were in the family. He was hardworking, but most times was cruel to his own family. There are many stories about him, and eventually, my great-grandmother, Hannah, divorced him in 1903. It is a story of heartbreak and hardship, and part of my family's fabric. Part of what has shaped all their descendents.

In 1899 Oscar was 19-years-old and living on his father's farm. One of the worst things that could happen on a farm happened. A barn fire. Jons, my great-grandfather, sent Oscar into the burning barn to retrieve the horses stabled there. Oscar dutifully ran into the burning barn to pull out the magnificent horses that my great-grandfather took great pride in. On his second time into the raging fire, a post fell, and knocked him unconscious. Neighbors had arrived by this time, but left him in the burning building, trying to put out the fire. When the neighbors finally got the fire under control, they came back in to get Oscar. He was burned and dead. My grandfather, Aaron, was not there that day, and was forever bitter about it. He regretted not being there that day. He was sure that things would've been different, if only he had been there. He was two years older than Oscar. This photo shows the two boys about the age of two of my four boys.

The story goes that Jons said over and over again after Oscar's death and the fire, "My horses! My beautiful horses! Oh, my horses!" mourning the ones that Oscar was unable to get out of the barn. He never spoke a single word, or shed a single tear, about Oscar. It was the beginning of many events that shattered and scattered a family who had come together to America. Oscar was not the only child to die from Jons' cruel ways. One daughter, Esther Elizabeth, 14-years-old, was lifting heavy buckets of sand over and over, when they were digging a well. Her father made her continue, even when she apparently had overworked, and the doctor said her spleen ruptured. She died the following day.

Another daughter, Ellen Amelia, died from tuberculosis in 1901, only 2 years after the fire and Oscar's death. Immediately after Oscar died, she had a nervous breakdown. She was cared for at Fergus Falls Mental Institution before her death. Her father never asked about her. Finally, in 1903, Hannah, with her 14-year-old daughter, Mayme, left Jons, obtained a divorce and traveled to where most of her remaining children had now scattered.

Stories of families and even the bad things that happen are important. God's mercy and love for a family wasn't really that far away from the Piersons despite the hard times and difficult choices that were made. Today, our own families are strong, legion in number, and nearly all of them became servants of the Lord. Instead of being bitter, or turning a cruel streak, I have found that few descendents of Jons Persson are anything like him. And Aaron Pierson (who changed the spelling of his name from his father's) was the most influential person on generations of our family. His sense of humor, intelligence and kindnesses are legendary. I was never privileged to meet him, but heard many stories about him, especially from the one who called him "Papa"--my mother who was his youngest daughter. He died in 1953, years before I was born.

Things that seem to be a waste or a terrible tragedy can be used for good, and the saving of many lives, when filtered through the mercy and grace of God, who made sure that we all knew about Him and His love. It is quite appreciated by me and my family at this time of year.

131. strong roof and house (we are having hurricane-gale winds that blew the hardware store down)
132. a warm, tight house
133. electricity is still on!
134. no snow (missed us so far)
135. a deep ravine to contain the raging river, flooded by recent rain
136. Claritan (warm weather kicked up my allergies)
137. 3 black cats on my porch who seem to have adopted us
138. limes in my ice water (yum!)
139. crockpots and my yummy Mexican round steak
140. beautiful Christmas music
141. garlic-artichoke salsa
142. A Real Coca-Cola (ah, "the pause that refreshes")
143. antibiotics for my friends and family who have been sick
144. ibuprofen
145. careful records and photos of family that I uncovered after having them tucked away in a trunk
146. the gifts of story
147. guitars
148. friends who pray
149. the verse: Philippians 4: 6-7 "Do not be anxious about anything, but in everything , by prayer and petition with thanksgiving, present your requests to God. And the peace of God which transcends all understanding, will guard your hearts and your minds in Jesus Christ." It is true.
150. Max's cooking

My industrious friend, Teena Stewart, has a new blog to help in writing suspense fiction. It is called "Whispers in the Dark" and she offers a unique opportunity for suspense writers to join her critique group. Also, if you are in the ministry, be sure to check out her web site, Ministry in Motion, where those engaged in ministry can receive support and tips. It's a wonderful web site, rich in much information.
Posted by Crystal Laine at 3:06 PM

Fascinating picture and the story to go with it. Good work. Keep it up.

What an amazing story.

Your blog is fantastic. I intend to link to it it so I can visit again. Thank you for visiting "Mrs. Joseph's Kitchen." I appreciate your sincere comment.

The way you show the bad in God's light is touching.

It's ironic, the story I'm working on has much of the same theme you're showing here (not to mention a barn fire.)

We need to meet for coffee.