Coming to America: The Perssons and Thompsons 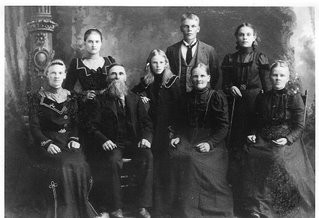 On With the Story of Coming to America...


A couple days ago I revealed my mother's family's dark secret--that her grandfather was a harsh man who never mourned his children he had put into harm's way, drove his wife to shamefully filing for divorce at the turn of the century by his cruelty to her (that wasn't a common occurance where the woman left the man and divorced him,) and one other daughter being committed to one of the first mental institutions, which sprang up after Dorothea Dix campaigned for better conditions for mental patients.

This family portrait is missing a couple people--Oscar, who died in the barn fire, and Esther who died when she was overworked by lifting pails of sand from the well and died from a ruptured spleen the next day. The one lone son on the back row is my grandfather, Aaron. The daughter who would have a breakdown not long after this, Ellen, is directly behind her father. The portrait even looks as if there are missing people.

I have a similar photo of my grandmother's family. While these photographs are posed and they would have to hold still for a while, there is a stark contrast in the two families. No one is smiling in the Persson family portrait. When I study their faces, knowing what their family was going through, I see pain and sadness. Maybe bitterness, in the Persson family. 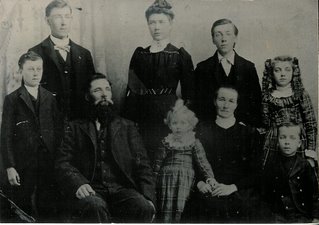 On the other side, I have been told lots of sad stories from my grandmother's side, but they were a happy, giving family with many people bearing witness to their many kindnesses to people--with even many stories of kindness/neighborliness to the Indians on a nearby reservation,(the people who were despised by many, especially the ones who remembered the uprisings.) I can tell you more about them later, but look at my Great-grandfather's face, Bernt Thompson.(He the one with sparkling, friendly eyes on the front row.) I want to know him immediately.

The smallest child, and only blonde in this family, is my grandmother, Anna Thompson, who was "stolen" for a day by the local Chippewa medicine man, Mickinock, when she was just a few days old so he could show his friend's blonde-headed baby off to his people. Notice how her mother lovingly cradles her hand and leans in. This was the family who helped young Aaron Pierson when his first wife died. These are the people who tucked him safely into their family and cared for his five children, as he struggled to hang onto his farm in those mournful days after his wife's death. And their youngest daughter,Anna, two years later, is whom he fell in love with, married, had five more children with, and cherished, until her dying day ( my mother was only 5 years old when Anna died from tuberculosis.)Anna allowed Aaron's children from his first marriage to name their youngest daughter(my mother.) They picked their dead baby sister's name, Lillian Arlene. (My mother would say with a smile later that it was tough to see her own name on that baby's tombstone.)

What stories are being told in your family? In our family we love to tell stories. We laugh about the funny things that have happened, and miss the people who are gone. My kids know about Great-grandfather Aaron and the wolf thrown over his shoulder, the time the bull charged him and he flipped him over his head, and a whole bunch of stories displaying his sense of humor. (For another time.) It is important for us to tell stories. It is the best gift you can give to those around you.

Maybe you are grasping for hope right now. Maybe you are like Aaron, bitter and angry at someone in your family. Many of Aaron's sisters died, his first wife died from a tubular pregnancy just a year after they had lost a baby. He was left alone with five small children. Just when he was desperate and didn't know what to do with his children, along came the Thompsons. Did Aaron pray to God to help him? I think he probably did, as he was known as a man of God in his church and community. I'm sure things seemed pretty desperate before they got better.

You have to tell your stories. Garrison Keillor says,"We need to write, otherwise nobody will know who we are." If someone had not written down these stories that passed on to me, and if my mother had not told the stories to me as a small child, I would've never known. I wouldn't know that I came from people who had come through hard times, and could go on. These are more precious to me than anything. If you don't know your ancestors' stories, that is ok. Tell YOUR stories, the things that you have come through, the things that make you smile and cry.

More 1000 Gifts.....
182. Cheeseburgers from McDonald's (yeah, they are a weakness, but tasty and quick when you are hungry and out.)
183. shared laughter with Bryce and Max (my two youngest)
184. Melba, who loves us
185. the internet
186. "God-moments"--those special moments that God shares with you a thread of hope
187. seeing my "flower girl" from our wedding Saturday evening and chatting about writing! (and her precious gift--her daughter)
188. feeling the "beat" of the music on drums
189. radio--music that comes from "somewhere" and we don't even think about it, but just enjoy it
190. cute little bird ornaments I found on sale in the Hallmark shoppe while my boys were taking guitar lessons
191. chatting with the owner of the Hallmark shop about mutual friends and our families--leaving with a smile of connection
192. the great guys at the music shop who can fix any instrument and love it as much as you do
193. downtown Christmas lights
194. the quiet of the country in the early morning hours
195. email--instantly connecting with people I can't always call
196. praying for a friend I've only seen a few times who lives across the country in her moment of need
197. My Heartsong Presents historical books I got in the mail
199. My gold sweater that makes me feel almost elegant (even though I'm not!)
200. Max whistling (I know he's home and happily baking)
201. Speartoons!
202. American humor
203. Jim Watkins and his humor (Even when life gives him lemons, he knows to pray what to do with them)
204. My gold cameo ring that feels smooth on my finger
205. Healthy Hoof Treatment (a hand treatment just when I was giving up hope that my cracked, dry hands would heal and I'd tried EVERYTHING) (Oh, yeah. Figures that it is a treatment for horses' hooves...)
206. Sheryl leaving a comment and sharing joys with me
207. other people who leave comments
208. Ramona's joy over her new book
209. Cranberry-orange bread
210. smell of freshly baked cookies while I write (Max is baking again...)
211. the aroma of Christmas Punch scented candle by Yankee
Posted by Crystal Laine at 7:14 PM

What a wonderful and sad, yet hopeful and redemptive story. Beautiful.

(There are so many similarities in your family's story and the one I'm working on. It's just kind of weird to read. One of my characters is LillianMae--LillieMae, and another character loses his wife a year after they'd had a stillborn son. All set in a different time with a different story, but still wild for me to read it here.)

What a great post Crystal. It made me realize I need to start writing the snippets of memories down I hear from my mom & grandma. I always think I'll remember them, but that's not necessarily so. And you'll never know when one of those snippets of memory might make a great addition to a WIP.

You have a gift with history, my dear friend. You've artfully given us a glimpse into your heritage. Very cool. Hmmm. Now I know why you love historicals...

Crystal, my mom's middle name is Arlene also! That is the name she goes by too, so we share that in common. And cranberry orange bread is one of our favorites. Yes, family stories are important. Thank you for sharing a bit of yourself with us.