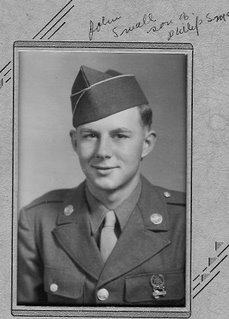 This is my husband's Uncle John. He lives not far from us and we've enjoyed a lot of good times with him (trapshooting, playing euchre.) My husband worked with him on his farm when my husband was a teen.

He has 3 children, 4 grandchildren and 2 great-grandchildren. And yes, he served in World War II. If he had not come home, we wouldn't have the great guitar player, Phil, his son, in our band because John wasn't even married when at 18 he went off to war. His grandson has also served in the military as a tank driver.

My mother-in-law's cousin was at Pearl Harbor on that day. It's hard to imagine such an attack today--we are friends with Japan. What a difference a generation makes. It is important to remember the events, the times and the pulling together. Uncle John is of the best people I know. If you asked him, he would say he didn't do anything extraordinary--he just did the best that he could. He had good family and friends to come home to.

On this web site is the authenticated speech that President Franklin D. Roosevelt made the day after the attack. It starts like this:

"Mr. Vice President, Mr. Speaker, Members of the Senate, and of the House of Representatives:

Yesterday, December 7th, 1941 -- a date which will live in infamy -- the United States of America was suddenly and deliberately attacked by naval and air forces of the Empire of Japan."

If you read the entire speech, you will notice that Americans were not the only ones attacked. There is a long list of places attacked. If only it had not happened. But it did.

One of my favorite historical fiction writers, Tricia Goyer, wrote a book called Dawn of a Thousand Nights. Set during this time in American history, Tricia did her homework--she interviewed WWII vets about the events, their feelings at the time. It is an amazing book (as are all of her books.)

Here is a taste of that book from Tricia's site: 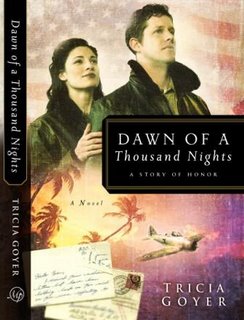 "Daniel Lukens has two great loves: combat flying for the Army Air Corps and Libby Conners, a female pilot he met while stationed in Hawaii. Libby is a flight instructor, and their budding romance is put to the test when Dan is transferred to the Philippines.

Mere months after their parting, Pearl Harbor is bombed by the Japanese. Eight hours later, Clark Field on the Philippines is also bombed, propelling the Americans into the war and forcing the U.S. military forces on the island to fight with limited food, weapons, and supplies. Dan and the other soldiers bravely fight, only to soon find themselves prisoners of the Japanese.

With the United States at war, Libby is one of the first female flyers called up for the new Women's Auxiliary Ferrying Squadron, WAFS. Yet, just when Libby feels she's making a contribution to the war effort, her new friendship with Sam Struthers and a freak accident leave her world spinning. Can Libby's new found faith in God keep her strong?

Natsuo Hidki is an interpreter in the Imperial Japanese Army who thinks of honor above all else. Honor to his homeland, to his emperor. Yet once schooled in the United States, Natsuo is conflicted by the memories of his American friends. When Natuso is confronted by a ghost of the past, he questions the code of honor he's swore to live-and die by.

A thousand nights of darkness pass between the embrace of lovers and friends. Will they survive to witness the dawn?"

Tricia has a gift for bringing those events and those people into the focus of God's love for all people. If you're looking for insights into those events, I highly recommend reading this book. (I love reading historical fiction.)

251. Holly berry Christmas lights
252. Card from my Grandmother with sentiments of love and photos (she lives in Tennessee)
253. a special package in the mail from my Aunt Linda! Love it!
254. Being remembered from far away
255. gift of freedom thanks to men and women like Uncle John and many others
256. time spent with my oldest son running errands and shopping--good conversation
257. warm hat, gloves, scarf in my favorite olive green
258. warm sherpa and leather coat
259. electricity and a warm house and a warm car in our subzero weather
260. medical personnel who do jobs in this weather
261. smiles from people you don't even know
262. Robin Lee Hatcher's Coming to America Series (am reading Dear Lady)
263. Fun quiz on your accent from Robin Lee Hatcher's and Tricia Goyer's blogs


264.Finding out that I have a good voice for radio (probably a good face for radio, too...)
265. Blogs like Mrs. Joseph's and being included on her "eye-catching" list (Cool!)
266. Funny cartoon sites like Dave's
Posted by Crystal Laine at 9:47 PM