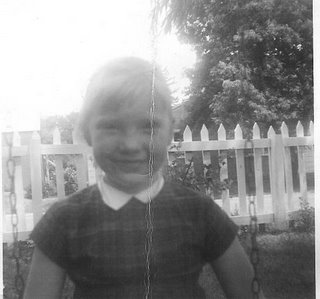 And I can't remember the rest of the chant--can you? (You're old if you can. ha!)

I didn't go to kindergarten because we lived in the middle of nowhere on a gravel road. Most people my age probably didn't go. We had dogs and cats and cows and a great little pony named Star (whom I loved above all.) I loved where we lived. I was ruler of my little domain. I had a raccoon named Jim, and a little brother to boss around, and plenty of animals.

But when I was entering first grade we moved to a small city because of my dad's work. I had my own room and routinely began having nightmares about wild animals looking into my windows at night. The windows were small, horizontal and situated at the top of the room and you'd have to be pretty tall to look in. I didn't like the closeness of the neighbors, and it was all pretty strange to me. I missed my pony. And one of our dogs started causing problems. He was getting out and stealing. He'd bring stuff that people left in their yards and deposit them on our porch. We'd have to go door-to-door to ask, "Is this yours?"

It would be unbelievable what would be left in their yards. We ended up taking that dog to my granddaddy in Tennessee because my mom got tired of having to deal with it. I loved that dog, and my granddaddy, being simpatico with me, loved him, too. Someone, however, ended up poisoning the dog because he couldn't get over his thieving ways. He was also territorial in that he wouldn't let anyone trespass into granddaddy's yard. He probably had learned that when we lived back in the country. I suppose this was only a part of why I hated living in the city.

We owned a pretty good corner lot with a white picket fence, apple and peach trees, a small vegetable garden, a grape arbor and pine trees and rows of peonies and rose bushes. It looked idyllic, all-American. Our neighbors were a strange mix of characters. And because my dad was not too keen on the school system, he let my mother enroll me into a Christian school of my mother's family denomination, several blocks from our house. I loved books, could read and was very excited about going to school with kids. Except for some cousins, cradle roll at church, and my little brother of whom I'm 4 years older, I didn't have much experience with being around kids.

I was in a classroom of four grades. The other classroom housed the upper four grades. We had school in the church and our only playground was the parking lot. The two classrooms were taught by a husband-wife team. My teacher was the woman and her husband was the upper grades teacher. I didn't know it at the time, but I have a strong auditory learning style, so it was difficult for me to work on my seatwork while my teacher was teaching the other grades.

Soon I was listening to and absorbing not only my work, but 2nd, 3rd and 4th grade work, too. I would get all my work done and remember everything talked about in the other grades. I had a lot to talk about (an auditory trait) when I would get home from school. Since we were not allowed to talk much in school, I had to restrain my talk to recess and to when I would be picked up by my mother. Sometimes I would run to the car because I had so much pent up to say.

Lou Ann was the pastor's daughter and in fourth grade. She was sort of the "boss" of the whole class. Being outgoing and always seeking attention, she would hold court at recess and she did all of the talking. All the kids would gather around her to hear what she had cooked up for us to do at recess. She organized games and bossed us by saying who got to do what. I am not sure if the teacher was intimidated by her because of who her dad was, or if she was just relieved that she didn't have to organize us at recess (she never got a break from us all day long.) The teacher just let her do whatever. She would stand away from us and just let Lou Ann take over.

I, having been the princess of my entire universe from nearly the beginning, and having always been around adults (and used to getting my way,) from the beginning wasn't too keen on Lou Ann. But I also was the smallest kid in the entire school, and was very blonde and very fair. I am sure I looked pretty puny next to Lou Ann. Plus, I was an "outcast" because my mother had been unfairly ousted from her denomination(though she went to church regularly,) and my dad, well, he was a "heathen" according to "The Church." I not only was reminded of this black mark by my cousins on my mother's side, but now by kids at our school whom Lou Ann had informed (which would be--oh, yeah. Everyone.)

But, being a bit of a rebel, I bucked the system from the beginning. I wasn't going to have Lou Ann tell me what to do, first grade baby or not. I knew I was a good person and that the love of Jesus was in my heart, too. I knew I was smart and had as much right to talk as anyone else. This baffled Lou Ann.

Lou Ann had to get control of me, so I became her concentrated campaign effort. (Plus, besides me, her domain was pretty secure.)First of all, she corrected me whenever possible. She made sure to make it appear that I was not only the most ignorant person on the face of the planet (regardless of my straight-A status, except in handwriting,) but she wanted everyone to know that I was tainted with "shame." I distinctly remember telling a story(probably about my pony, my dogs or Tennessee--my most beloved place on earth) in a group of kids, and Lou Ann interrupted to correct me.

She made saying "ain't" sound like a sin. All the kids gasped and I wasn't sure how to handle this, not being used to someone calling me stupid. Plus, she made it sound like I had cussed--and I sure never did that. I remember the teacher correcting one of my fellow first graders for saying "Holy Mackerel" and I had cringed about that. (I don't think I'd ever heard someone say "Holy Mackerel" before.)I didn't even think bad words.

Anyway, being a bit of a Pharisee myself, I was determined to at least speak properly. And being quite auditory in learning style, I could pick up every spoken nuance and was pretty good at mimic.

My sinful nature wanted to get into Lou Ann's face and say, "Ain't. Ain't, ain't, ain't, AIN'T." Who was she to tell me what I could and could not say? Instead, I clamped my mouth shut, as I probably blazed blood red. I blushed fairly easily and knew when I was being put down into my place. I don't think I used the word ain't again until I was in high school, when I finally discovered grace.

That is when Lou Ann knew she had me. And that's when Lou Ann started her next campaign to ruin my life. She would race to my mom's car every day (because she stayed at school to go home with her dad later, she didn't have to get ready to go) and she'd tell everything I did or said that day to my mother. I'd get to the car and there would be my nemesis, Lou Ann, telling my mom her version of the day. She had blabbed absolutely everything to my mother and I had lost my fresh audience. Not only had she hobbled my talking tendency at school, but now she took over my mother--my one and only audience. Since I needed to "talk" through what I learned, this was a major frustration to me.

And so, the nightmares began. I vividly remember the nightmares I had throughout my time at in that house, in that neighborhood and in that school. What I couldn't work out in my waking life, I took to working out in my dreams. Lou Ann was just the beginning, and actually a small part of my troubles. And while my bubbly, outgoing nature was somewhat suppressed, it didn't die out. Like Joseph in prison, I had to make the best of my life, because I wasn't going anywhere else.

My mom seemed to think that no one paid attention to Lou Ann and so she talked to her every day. She didn't discourage her despite my objections to Lou Ann. She would laugh and tell me I could still tell her everything, and that it was ok for Lou Ann to talk to her after school. It was hard to share my mother, but it was the beginning of my observations of my mom and her gifts of kindness to and understanding of hurting people.

Fortunately for me, Lou Ann's dad was transferred to another church at the end of the school year. By second grade I no longer had to contend with her. What I didn't know was that Lou Ann was actually the least troublesome person I could run into. But, I would have plenty more Lou Anns in my life over the years (still do,) but like my mom, I learned to deal with and understand the bossy Lou Anns of life. And it sure didn't kill the "ain'ts" for me. Ain't no doubt about it.
Posted by Crystal Laine at 7:43 AM

This is a great story! I can just picture that snotty little Lou Ann trying to boss the younger you around! I'm glad you attempted to stand up to her and that you didn't let her or any other "Lou Ann's" get rid of your "ain'ts".