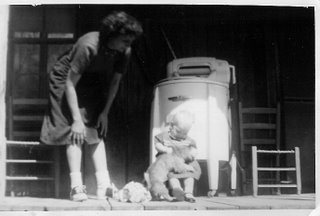 A Week of Nostalgia

My paternal grandmother, Pauline, turns 92 on Wednesday. She has outlived all of her brothers and sisters, two husbands and one son (my dad.) I can't be in Tennessee, and I don't get to see her very much now. Since both my dad (her son) and my mother (whom she loved and adored) are both dead, she's a link to my past. She still has a sharp mind. She is very thin and a bit feeble, but she still likes a good game of Bingo and likes to eat out. But I have a very special connection to my grandmother.

See, when I was almost a year old, my mother had to enter a tuberculosis hospital. Back then, you were quarantined if you had TB. They did awful surgeries back then. My mother ended up losing one lung and all of the second lung, except for one lobe. She ended up being there for nearly 3 years. My dad had to continue working, especially to pay for her care--and me, well, what was he going to do with me?

No one on my mom's side wanted me,(or could take me,) but my dad's parents jumped at the chance. And they would've raised me if my mother had died. (But mom was pretty strongwilled. Another story.) Grandmother, or "Mama" told my mother she didn't want to give me back when my mother finally got out of the hospital, but as she told my mother, "I promised you I would, if you lived." In the photos when they brought me back, you see my mother beaming ear-to-ear, and both of my grandparents with sad frowns on their faces. They were happy mom lived, but they were heartbroken to give me up.

My mother was in Ft.Wayne, Indiana and my dad worked as a truck driver, driving all over the Midwest in those 3 years--and my grandparents lived and worked in Tennessee. It took a lot of dedication to keep all of these family ties together. A war was being fought for life and family ties--and these people were on the front lines. My dad would visit my mom as much as he could. Occasionally, when she'd get a weekend pass out of the hospital, he'd steal her away to Tennessee so she could see me. She wasn't supposed to do that, but they were both rebels. My grandmother wrote a lot of letters and always made me scribble all over a piece of paper, or sometimes I'd add my scribbles to Grandmother's letter. She would include snapshots of me and plenty of detail about things I'd do.

My grandmother was pretty young when she had my dad, the second oldest child and oldest son. She still had two kids of her five at home, and worked full time. My grandfather ran a lumber business and sometimes loaded up my diapers (well, I was pretty good at that...) and my bottles, and would take me out to chop wood with him. My aunt was only about 13 when I came to stay and she could've resented me, but I don't think she did. My uncle pretty much ignored me, as I took over his "baby of the family" spot.

Aunt Linda was the one who often had to take care of me--and she had to have me in her room. Pretty tough on a teenager. This same aunt is still watching out for my grandmother--and she still checks up on me, even though she has many of her own family and lives two states away. I will always be grateful to my family in Tennessee for taking care of me when it looked as if my mother would die, and I had nowhere else to go. My aunt Linda had to stay home from school to take care of me, which was devastating to her high school experience (and evidently, even back then I was scribbling a lot and marked all over her yearbook.) Sometimes my other 2 aunts would take me home with them for the weekend. I remember their husbands with fondness and miss them. They were all my "mamas and daddies."

I brought with me my little Pekinese dog, Candy. I know it is hard to tell in the photo, but that is my dog. I still love dogs. Candy was with me for 11 years. My granddaddy, whom I called "daddy" like everyone else did, also loved animals, so I figure I got that "dog bug" from him. But grandmother allowed me to keep her, when they could've just done away with her when I came to stay. I don't know that I ever thought much about that until I was looking at this photo today. I have a dog in the house now, and I know how much trouble dogs can be, much less a toddler.

As you can see in the photo, grandmother had the modern conveniences--a washer on her back porch. Laundry day was quite a job. And that's not all. There was no indoor bathroom. Imagine having to potty train a toddler during those days. I was a lot of trouble. Me and my little dog.

And my mother had 5 miscarriages before getting me. I was the baby she had longed for--and she had to leave me with her mother-in-law. My mother had lost her own mother when she was five-years-old. She had lived with my grandmother when my dad went into the army during the Korean Conflict. She really thought of my dad's mother as her mother, too.

At first my dad's family wasn't too sure they liked my mom when he first brought her home to Tennessee and married her. She was a Northerner, and as I would hear my grandmother say about other people from the North--"not o'wer kand of peoples." But my mom won them over, and Grandmother would conveniently forget that my mother was from as far north in the U.S. you could get without going to Alaska. As my granddaddy would say to my mother before he died, "I think of you as one of my own daughters." And so it was.

So, excuse my looking back this week. My Grandmother Pauline, "Mama," has lived almost a century. She has seen a lot of changes in her world (has her own private bathroom now--indoors) and in her family.
Posted by Crystal Laine at 7:42 PM

This is a wonderful story. Have you thought of putting it in a book?

Interesting you should say that--yes, I started a book using a lot of this--and I wasn't sure if I was telling it right. So, blogging this story really has helped. Thank you for your kindness. I especially am thankful for you coming by to read.