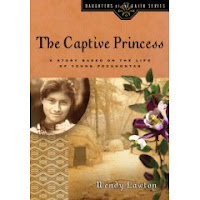 
(THE WOODLANDS, TX) What do porcelain, Pocahontas, and prizes have in common? Wendy Lawton, author, sculptor and literary agent is on a mission to find the next Daughter of the Faith for her highly successful middle grade series. In celebration of the release of The Captive Princess: A Story Based on the Life of Young Pocahontas, her seventh novel in the series, Lawton is offering a plethora of prizes for contestants who are chosen from among those who post suggestions on Crystal Miller's When I Was Just a Kid blog. (To be eligible, you only need to follow directions for posting a comment here.)

One lucky winner will receive all seven Daughters of the Faith novels ($49 value), while another will get all four books in the Real TV series ($44 value).
The grand prize--an autographed Courage to Run doll and book, (value $695.00) will be awarded if more than twenty people comment before April 1, 2008, with suggested Daughters of the Faith characters.

Keep in mind that each character in this series is a real girl from the pages of history who took a stand for her faith (usually at great cost) while she was still a girl. Nominees should not be someone who grew up to do great things or who married a great man, bur rather a girl like Pocahontas, the Captive Princess, who stepped out in faith.

The Captive Princess: A Story Based on the Life of Young Pocahontas
Is there an American student who doesn't know some version of the story of Pocahontas-- whether the fabricated Disney version or the equally fictitious but oft-told love story between Pocahontas and John Smith? Wendy Lawton digs into the history and tells it entirely through the eyes of the young Pocahontas. And though the romantic accounts are the stuff of legend and lore, Pocahontas' faith story remains one of the most beautiful love stories in history.


What others are saying:

"Pocahontas has long been a favorite character of mine, and Wendy Lawton brings her to glorious life in The Captive Princess. Through Lawton's excellent research and vivid writing, walked out of the dense forest and into my heart. This book is a treasure!"
Angela Hunt, author of Uncharted

"I jumped at the chance to read Wendy Lawton's latest book, The Captive Princess, because of her previous stories. Again, she wove her literary magic. Always true to historical facts and able to infuse spiritual truths naturally, Wendy Lawton is a master storyteller."
Donita K. Paul author of popular Christian fantasy including The DragonKeeper Chronicles

WENDY LAWTON feels equally comfortable on a computer, at a writer's conference or with a cool lump of clay in her hand. She's been an artist, a writer and now, a literary agent with the respected literary agency, Books & Such.

No stranger to the literary market, Lawton has written seven books in her middle grade Daughters of the Faith series. These books were followed by a series of teen books The Real TV series and her nonfiction book, Impressions in Clay (Moody).

Wendy Lawton is available for interview or blog appearance.

if there are at least 20 comments, and a drawing from the comments will be held on April 1st for this doll:

Harriet Tubman, one of Wendy's dolls she created for this series of books she wrote.

The portrait doll of Harriet Tubman grew out of the character from Wendy's first book, Courage to Run.

"As I researched her life for this book, I fell in love with Harriet Tubman," Wendy says. "Her faith framed everything she achieved. By the time I finished writing the book, I couldn't wait to take clay and sculpt a portrait of Harriet as a child."

The historical Harriet Tubman epitomizes heroism for her life work in the Underground Railroad, but Courage to Run is the story of her girlhood when faith was born and courage discovered. The 11" porcelain doll wears a homespun, patched dress, tattered straw hat and much-worn leather work boots. Just as in the story, she carries her treasure, the quilt made for the homesick girl by her mother.

The doll was made in the Lawton workshops in California and was limited to an edition of 350.

CONTEST RUNS FROM MARCH 7 to APRIL 1st
Come on over and post a comment with your email contact and a suggestion for the next Daughters of Faith true life character.
Posted by Crystal Laine at 4:49 PM

Email ThisBlogThis!Share to TwitterShare to FacebookShare to Pinterest
Labels: The Captive Princess Contest, Wendy Lawton, When I Was Just a Kid Interviews