What Time Is It? 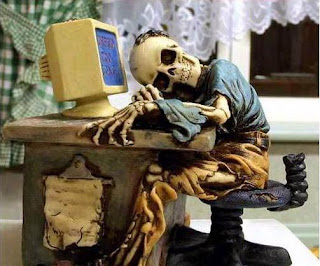 I've used this photo before, but it just works for how I feel right now. I didn't mean for it to be this long before I made a post! I have When I Was Just a Kids interviews piled up and they are good ones. Tonight was the first time that I have had a chance to even look here.

Besides some responsibilities at home and school that took a lot of time, I also took over duties as ACFW Indiana Chapter President 2008 and have had quite a few things to take care of immediately. It's been awhile since I have been an officer in such an organization. I was editor of the Ft. Wayne Christian Writers and each month we had a newsletter that took some time. I was vice chairwoman and education chairwoman of a school executive board, and I interviewed teachers, amongst many other duties with that. And there have been other officer duties in organizations I have been a part of--but it's been awhile. And I'm older. Can we say fatigue? Plus, tonight we are supposed to get a lot of snow. Ugh.

So, all of my goals were tossed over the side like ballast. I feel like a failure. I did accomplish many things--just not with my own interests and writing. I turned in several reports on manuscripts for my bosses, but nothing with my own writing.

Anyway, it sort of depresses me. I hope to get my footing again, but tonight I don't feel as optimistic as usual.

I did get another comment from N.J. Lindquist on my color dilemma and that was actually quite helpful. I am pink, I think. I wouldn't have thought so, but I held my wrist/hand and arm up next to my sister-in-law's and she is quite yellow/warm and is an autumn. I looked very light and pink next to her. I was wearing a blue red scarf that matches my purse exactly--which I love, and I remembered that red used to be one of my favorite colors. I also really like plum makeup colors. She thought the scarf was a great color for me. I always thought it was just because I liked it, not that I look good in it. I still need to be draped, but I've been getting out what few summer colors I have and trying them out.

Now, another thing that was discussed on a recent writers' loop that I'm on is branding. If you are in business, in writing or just watching TV, you are aware of branding! People do not like to be put into a category, it seems, with writing. But if you want to be successful in it and find your readers, you need to think about it. If you go to this site, you can take a test to see just how aware you are of brands. Even if you are a casual observer, these brands are pretty powerful.

Think about your favorite fiction authors. Would you be upset if you picked up, say, a Stephen King novel, and he had decided that he had always wanted to write sweet romance--wouldn't you feel cheated not to get the usual Stephen King fare? What if in the middle of the Harry Potter series, J.K. Rowling had decided that she was tired of Harry and wanted to instead write nonfiction chess moves?

I have been thinking about this, as well. What do I love to read? Write? I've been looking at the novels I pick to read (and what I'm writing,) and realized that I have narrowed my choices. It's something to think about at this point. I've also wondered how the things I write on my blogs dovetail with the fiction I write.

What is your favorite genre to read? (And how did you do on the brands test? I did rather well, surprisingly.)
Posted by Crystal Laine at 9:10 PM

My favorite genre is romance; contemporary or historical sweet romances. I'm a sucker for a good love story.

Delia, I knew we were simpatico! I, too, love a good romance and love historical or contemporary romances. I can't wait to read the new Barbour Mysteries--cozy mystery romances. Should be fun! (I love mysteries, too.)

I've reviewed every genre and romance is my favorite.