When I Was Just a Kid...Jim Watkins 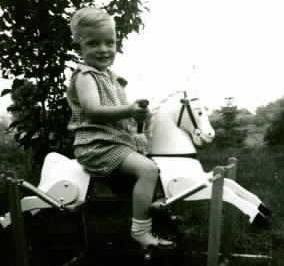 This guy grew up to be a rather dangerous man. You can see it in the squint of his little eyeballs, can't you? Even as a youngster he was out getting the bad guys, like his hero, The Lone Ranger.

Today's Kid is Jim Watkins who writes "heavy topics with a light touch." (He's funny but he carries a big stick.) And he's logical. What he says just makes good horse sense.

He's married to an equally creative and wise person, Lois, and they have two grown-up kids who married and each gave them an adorable grandkid. Check out Lois' link, as well, because she writes food for your soul. On a personal note, Jim helped me with my first web site and has been an encourager to me in writing, which he does for many, many people through his teaching and ministries.

Childhood Ambition: My two childhood heroes were The Lone Ranger (that's me on "Silver") and magician Mark Wilson on "Magic Land of Allakazam." Since there weren't alot of job openings for "daring and resourceful masked men," I planned on becoming a magician. (I actually performed at birthday parties, church carry-ins and Boy Scout Banquets as a teenager.)

Fondest Memory (then): The Christmas I got my "Sneaky Pete" magic set and my American Flyer electric train.

Then-In high school, winning a national award for the school paper I edited.

Now-Winning a Campus Life "Book of the Year" award for The Why Files.

In-between, the birth of my two children (now adults with their own children.)

Biggest Challenge as a child or teen: Trying to win my parents' approval, but that's something to discuss with a court-appointed psychiatrist rather than blog readers.

My First Job: While I made money picking strawberries, mowing lawns, and performing magic, my first full-time job during summer breaks from college was putting raisins in Raisin Bran at Kellogg's of Battle Creek.

Favorite thing to do as a child: Performing magic, creating a large layout for my electric trains.

Favorite Childhood Movie:"The Lone Ranger" (1949) although I'm too young to have seen the original release.

Anything else you'd like readers to know about you as a child: Most of those records are sealed by the courts.

Crystal Ed.'s note: Told you he was dangerous. By the way--he's really just kidding--as you might know, because he's a funny, funny guy!]

Jim: I remember, in second grade, re-writing the story of Pinnochio since I thought the suspension of disbelief was stretched too far with the "live" puppet becoming a live boy. So, I had Pinnochio die a prolonged, painful death of death elm disease. (Maybe a court-appointed psychiatrist is not a bad idea!)

Jim says: "I also loved writing [as a child]--which is now what I'm doing rather than magic and"leading the fight for law and order in the early west."

[Crystal Ed.'s note: Jim is doing all three childhood things--writing, being magical, and leading the fight for law and order, if you ask me.]

Crystal Editor :I don't have enough room in my little blog to tell you all the things he does, has done, will do. His official bio says it best:

Jim says: "I read somewhere that people with several part-time jobs are happier than people with one full-time job, so I'm an:

• author of twelve books and over two thousand articles

• threat to society• child of God.

The items above are what I do, but not who I am. Whether I succeed or fail in those jobs, I know that my identity is secure in being an unconditionally loved child of God."

CE: Check out all of his writing from blog to articles to books at :

Books to read by Jim:

4. The Why Files: Are There Really Ghosts?

5. The Why Files: Is There Really Life After Death?

6. The Why Files: When Can I Start Dating?

Top Christian Authors Share Their Secrets for Getting Published

CE: That should keep you busy for a few days!
Posted by Crystal Laine at 11:05 AM

Too funny. Thanks for the slice of life:-)

Sarah, Thanks for coming by!

Jim, I just wanted to thank you for being such a good sport. This was fun for me.

Wow, Crystal! I'm touched (and not just "touched in the head"). Will you speak at my funeral (date to be announced)?

"Dear friend, I pray that you may enjoy good health and that all may go well with you, even as your soul is getting along well" (3 John 2).