Sally Pierson Dillon: Meet Me at the Half-up Party 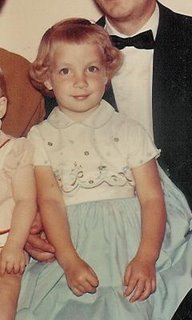 Sorry. Haven't posted a blog for a couple weeks. Amongst kids' events, flu and work, I suddenly grew quite melancholy. My cousin, Sally Jo, died from pancreatic cancer. She had suffered with lupus for years, often landing in hospitals, nearly dying, but never quite giving up. With a spirit that reminded me of my mother, she would fight on. Then, came the cancer. It was a battle she couldn't win in this life.

So, I thought I would be too sad in any post I would write. I just couldn't seem to get past it. I couldn't go to the "celebration of life" that they had after her funeral, so I just couldn't seem to find any closure. She was younger than I am. She had published quite a few children's books, articles and children's Bible lessons. She taught Bible classes and often spoke when she was able. She even got up and spoke at my mother's funeral. Her father, a pastor and man who had spent many years in Africa, England and then back to the states as a missionary, and her tough-minded mother had raised her around the world (along with her two little sisters, one who was born in Africa.) Back in those days her dad would record a tape (instead of writing a letter) and send them to my mother.We'd sit at the kitchen table with photos he'd send and imagine their lives in Africa. Amazing stories. Stories of adventure and danger and God's amazing grace. My mother and her dad were close in age as brother and sister, and also in heart. They were the two youngest of 11 children born to Aaron Pierson.

Sally was a wild teenager. She was brilliant and like most imaginative and passionate people in youth, she wanted to try everything. She graduated from high school at 16 in England and came to the states to go to college. It was more freedom than she had ever experienced. Somehow, God in His plans and mercy, allowed her to live through those turbulent years. She rededicated her heart and soul to God. And boy, when she did, look out! She never lost her heart for the rebellious teens of the world. All that passion and exhuberance went into raising her two sons (after she had gotten married,) and into her nursing career. Then, she started writing.

The one article that I remember the most was in this column she used to write for a Christian magazine. The column was called "Sally Sez" and it was full of her typical humor. This article was about when we die how we wait until God calls us and the dead in Christ rise first, and meet with the others in the sky "half-way up." She talked about when we all met up together we'd party right there in the sky, "half-way up" on the way to meeting up with Jesus. At my mother's funeral she talked about doing this very thing with my mother one day. It sounded like a lot of fun--and Sally was all about fun.

Her suffering was tremendous in this life as an adult, but she didn't lose her humor or her spirit of vitality and zip. I know for sure that when I get to that party I will recognize her. She won't be in the body that she left earth in. She'll have her fun and party body on.

And thinking about it in that way makes me smile. I can still picture her in pedal pushers (you have to be a certain age to know what those were...) hanging upside down on the swing set in my cousin Mary's backyard, yelling like a warrior and turning cartwheels when she'd finally fall to the ground. Eyes sparkling and freckles all over her face, she would've given Dennis the Menace a run for his money. That is how I choose to remember her in this life. And that is the spirit I'll recognize at the Big Sky Party on the way to Jesus.
Posted by Crystal Laine at 10:57 PM

Crystal, I'm so sorry about your loss. You can tell from your words how much you love her and how special she must have been. This post is a beautiful tribute to her.

I've been missing you...just giving you a little space. Glad you're back. ;) Can't wait until the next get together.

Crystal, I'm so sorry to hear about your cousin Sally Jo's death. May Psalm 56:8 be a comfort to you.

"You keep track of all my sorrows.
You have collected all my tears in your bottle.You have recorded each one in your book." NLT

You are in my prayers.
Sheryl

Sheryl--I love that version of that verse. So simple and sweet. It is such a comforting verse, isn't it? Thanks for including it.

While I'm not in the immediate family, don't we always sorrow with each other. When my friend hurts, I hurt. Thank you for coming alongside with me today.