even if it seems like the same ol', same ol'. One of my favorite movies is Groundhog Day starring Bill Murray and Andie McDowell. This total creep of a sleaze weatherman gets a great gift--to live the same day, Groundhog Day, over and over and over. Day after day, the same things happen, the same town, the same lines, the same people. You get to see how his reactions, attitudes on those days changes things, but most of all changes him. In one part of the movie, Phil tries to change the outcome of a man dying. He is able to save quite a few people around town, but this one man dies day after day and he finally realizes that he can't change this--but he does make the day better for the old man. I love that movie.

So, each day I do try to live better than the last, even if that day appears crummy, like today (cold, bad roads, snowing, family getting sick,etc.) I was especially thinking about this last night when my husband came home from taking the boys to their guitar lessons and told about a minor thing that happened to him.

He went to a downtown pharmacy while they were in their lessons, and said that while standing in the checkout line, he got out some change and dropped a penny. There was a long line,and a woman picked up his dropped penny and did something you don't expect--she pocketed it! Now, one penny is nothing, really. So what? But think about this for a moment--what would make a woman pocket a dropped penny right in front of the person who dropped it? What kind of a person does this?

I came up with a brainstorm of possibilities:

1. She is desperate. This penny will be the difference for her starving children.
2. She actually did not see him drop it and thought it was just lying there. A penny found is a penny earned.
3. She thought she dropped it herself.
4. "Oooooooh! It's so shiny!" (That's blonde inside the scalp...)
5. "Just one penny a day will save a young boy who has no food and no school books in Outer Siberia."
6. "Wow! A real old penny! I'm hoarding mine for when they discontinue pennies!"
7. "The old coot will never miss this."
8. "Mooooo haaaahhahahahahahahahahaa! I'm rich! Rich! Rich beyond my dreams!"
9. "Find a penny, pick it up, then all day you'll have good luck."
10. "Meh."

Two and three were the most generous thoughts, really, that I could think of for her. Regardless of what good you would do with the penny, it wasn't yours to begin with, no matter how small the amount. Thinking that you could do more good with someone else's money is arrogance. I tend to be cynical. Mostly, I just kept thinking, "What kind of a person doesn't offer to give anything dropped back to the person who dropped it??!"

I am afraid that I wrote into my brain something about the stinginess and moral decline of society(and especially this woman.) I compared her to the generation who would give the shirt off their backs, the last of their stone soup and a ride into town during the '30s, '40s, '50s. I thought of the European generation which hid Jews from the Nazis, feeding and clothing them, at risk to themselves and their families. I thought of those Midwestern people(a many who had lived in my community) who hid runaway slaves in their walls, giving them shoes off their own feet, warm clothing and food for the cold trip north, and risking life and livelihood for what was right. I think about countless others who just picked up the penny or the grocery list you'd dropped and smiled and said, "Hey, you dropped this."

I thought of one more thing. One of girls I knew in college had the opportunity to go to Russia with a singing troupe. Some of them took their one Bible they were allowed for personal use on the trip, and each decided to conveniently "forget" it on a bench or somewhere. (Their personal Bible happened to be in Russian and this was before the fall of Communism.) The girl I knew left her Bible on a bench and walked away, feeling pretty good about her act and that someone might actually find it and it would change their life. Well, as soon as she left it behind, someone snatched it up...and ran after her! "Hey, you forgot this! (you dumb American!)" She wasn't prepared for this. She wasn't prepared for someone actually having a sense of moral kindness in a country at that time that was full of poverty, moral decay, no God--theft and killings and suicide. It was a funny lesson to learn.

As you read the headlines, bump into someone who cusses you out for tripping into them, and a multitude of other angry, selfish, bitter actions we see too often, you wish you had the power of granting Groundhog Days to a lot of people. You might even wish you could have a few Groundhog Days of your own.

You might have noticed, if you've read this blog for very long, that I have made a few changes to the page and format. My blog is the one place where I can actually do a Groundhog Day kind of thing. It's a great feeling to be able to change things and I needed a pick-me-up (especially a good time to do it since I needed to change over to the new blogger.) 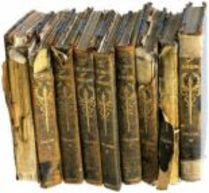 I like finding new systems. Improving on the old systems. Systems, systems--what works and what doesn't? So, go ahead and comment--like the old look? Like the new?
Posted by Crystal Laine at 12:25 PM

It should've surprised me when you said the lady picked up the penny and pocketed it, but it didn't. People just don't care about other people in even the smallest ways anymore. How did she know that penny wasn't the difference between your children starving? She didn't! And more than likely, if she was standing there when he dropped it, she knew he dropped it and she just did not care. It's a shame the way people treat one another nowadays!

Howdy, I tripped on over via Delia's blog. Nice thoughts, nice place and excellent writing style. I'll be back by.

"Thinking that you could do more good with someone else's money is arrogance." Sounds like politicians... A few years ago, Dick Armie said to Pat Robertson on the 700 Club, "It's amazing what good things some politicians want to do with other peoples' money."

This is one of the best blog posts you've written. Wow! I am challenged, inspired and encouraged all in the same breath. May I strive to be better than I was yesterday. Thanks for sharing. Maybe the lady didn't know who dropped it and didn't want to make a public specticle in front of a long line of people, too embarrassed. I loved the story of the girl with the Bible.

Delia-you are always so wise. And a practical woman. You think like me...

King Jaymz--It is so cool to meet you. Cool quote. Come back to the old lady blog any time!

Karen--you make me blush. Thank you for your kind words!