I swiped this meme off another blog, my good friend Nancy at Anchors, Signposts & Wanderings. You're supposed to post the 4th photo in your 4th file and then share the story about it.

So this is the fourth file, fourth photo: 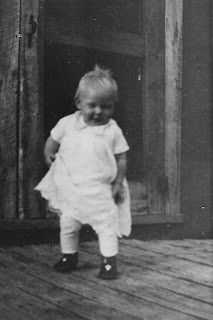 This is my mother as a toddler. It's one of the very few photos my mother had of herself as a young person. She was the youngest daughter in a family of 10 kids. Her mother was the second wife of Aaron Pierson. His first wife died of TB and left 5 small children.

My great-grandparents (Ane and Bernt) and their daughter(my grandmother, Anna) went to Aaron's church and helped him out with his five young children after his wife's death, and so, Aaron married my grandmother. Then, they had five children, making 10 kids! My mother was the fourth child born to Anna and Aaron(they had one more, a son,) so Anna asked the older kids what they wanted to name my mother. They picked their sister's name--Lillian Arlene--a child who was the sixth child in the first family who died as an infant. My mother said it was strange to see her own name on a tombstone in the family plots!

My mother didn't have her mother very long. Her mom, not long after having another child (the son mentioned above) had TB and died when my mother was almost 6. Her older sisters, who had gone through this experience, too, you think would've been more compassionate to this small girl who was only 5 when losing her mother, but they often were cruel and harsh to her. On the morning of her 6th birthday she came down the stairs, sat at the table, expecting the same birthday delights that my grandmother always did for all the children--fixed them whatever they wanted for breakfast and making them Queen or King of the day. No. The older girls (teens and young 20s) snapped, "You're a big girl now. Get your own breakfast. You don't have your mother anymore." Harsh reality.

They continued their harsh treatment of my mother even after I came along--I got to witness it and feel the brunt of their disdain, as well. Certainly when my mother also got TB you would have thought they would take care of me--but no, and thank God that my dad's parents took me and loved me as their own child.

But this little girl was obviously happy, and her mother, though managing as a farm wife with nine-soon-to-be-ten children of various ages, delighted in birthdays and her carrier pigeons pets and a husband who was older but funny, despite having a hard life of his own. I think my mother looks happy and cared for, don't you? She has no idea of what is to come, but I do think she adopted her own mother's attitudes, despite being so young when she lost her.

So, do you want to play? If you have a blog, you might try this--find the fourth file and fourth picture and tell about it. Leave your link if you do.
Posted by Crystal Laine at 7:53 PM

Love the photo. I'm struck by the similarities between it and your own B&W photo in the sidebar. And what an amazing story as well. Glad you played along.

I'm technically challenged and don't "get" what the 4th photo in the fourth file is. I guess these are photos in a file on your computer?

My ignorance aside, I'm fascinated by how much personal information you have about your mother. Also, our family's photos are in an album we rarely look at. You seem to have photos at your fingertips. How do you do that?

Was your mom a natural story teller or did you ask her a lot about her life? Are you writing the stories down for your family and are they as fascinated with these stories as you are?

Nancy, I love your blog! It was fun to play along.

Cathy, yes, you are right--the fourth file on my computer, and the fourth photo in that file. Yes, my mother told me stories all the time. She was a good storyteller, as was my dad. I spent so many hours at the kitchen table listening to amazing stories my mom told. Also, her Aunt Mina had written down a history of our family, so I have that--and I grabbed as many of the family photos as I could get my hands on and scanned them into my computer.

My brother has some photos I'd like to scan--I don't think he even looks at them.

I have played with writing historicals since that is my favorite genre to read. What do you think??

LOL, you had a lot of questions, Cathy! (You must be a journalist...) Anyway, is my family as fascinated by family stories as I am? Well, yes and no. My boys like hearing stories of their grandfather (my dad) the most. In fact they have asked me to write his story.

Some of the stories are chronicled in this blog. My mother-in-law also has written down stories about her life--and she is going on 91 years old. She has some fun stories, too.

Who will tell the stories? I guess if we don't, we'll lose them!It's good to know the stories of our families, I think. I take my cues from the Jewish people who chronicled amazing stories.

Crystal, just doing a drive by and really enjoyed today's post. Happy New Year. But I really want to tell you this quote on your site hit me hard. I love it. I am printing it up now..thanks.

One of the greatest feelings in life is the conviction that you have lived the life you wanted to live--with the rough and the smooth, the good and the bad--but yours, shaped by your own choices, and not someone else's."

You seem to mix present-day topics and history together well. As an example, you take old pictures and put them on the Internet, which I would not have thought to do.

You are obviously capable of writing about anything and if historicals interest you, I say go for it. Your personal stories could actually be a launching place for the fiction, in my opinion, and you have a fresh, natural way of writing about those.

Hi Crystal,
Being a daughter of the last child you mentioned in your story, I took great interest. Dad told us stories of his growing up years, but we heard very little of the harsh treatment that the younger kids endured. I didn't find out about all that until I was grown, with a child of my own. Dad liked to teach his girls to be tough, take care of themselves, and think for themselves. The lesson that stuck in my mind over time was "life is what you make it". I didn't understand that concept very well until much later. It took on additional meaning when I discovered more details about his childhood. Interestingly, he still won't talk about anything bad that happened, I have to get that scoop from Aunt Mayme :) Hope to see you again sometime soon...
Bonnie