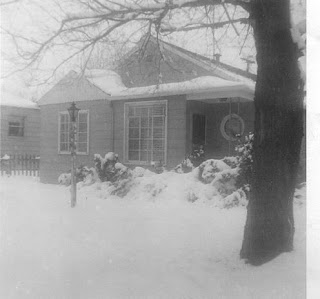 I thought you would like to see the house I was talking about in a previous blog of West 11th Street. I grew up here from age 6 to 11. I vividly remember this house and the neighborhood. It often haunts me in my dreams.

I have desperately been trying to connect to my own writing. Having worked on all kinds of things in the writing field, I left the original intent I had to write my own stories and life, and tried to fit "the market." I started this blog in an attempt to regain that voice that I originally had. I don't know that I've accomplished it. However, the last few days I've been going over my notes from the Midwest Writers Workshop, and found that some of that came back to me in this conference.

As it has happened so often, when I start to connect to my own voice, I end up on West 11th Street. It is a place just flooded with things that burst in my senses--tastes,sights, smells, feelings, sounds, emotions, curiosity, laughter, tears and the world. My street was a minature world of various cultures and religions and mores. Other places we lived weren't so invaded by other people as this place was. I think part of it is that there was so much conflict on this street, and I was able to observe it and sometimes be a part of it, whether I wanted to or not.


One of the tastes that I so loved was Tu-Your-Door Pizza. I can remember it like yesterday! A loaded supreme. And it came TO OUR DOOR. LOL. We never lived in another place where we could have pizza delivered. It would happen on Saturday night when my dad would be home from working as a long haul, owner-operator trucker. He usually came home on Friday night or Saturday morning and would be dispatched Sunday night. Occasionally he'd be home midweek, but only to catch some sleep and get another load. Mostly, he had enough of on the road food and so Mom cooked him something, but occasionally even he wanted that pizza. What a treat! And we'd watch HeeHaw or Midwestern Hayride while we ate. That was a good memory. I still love pizza(and I still love country music.)

So, somehow I know that when I write, I have to have something of West 11th Street in there. I don't know at this point how it will show up in my writing, but I finally accept that it must happen. I'm working on a cozy romantic mystery, but it's been tough going. I realized that I wasn't really being authentic to myself while at this conference. I can't pinpoint the precise moment, but maybe it was while listening to Brent Bill, Jeff Stone or Sally Wright or Lee Lofland or Shirley Jump. Or maybe it was while talking to Cathy Shouse or Charlotte Shepperd or Doc Hensley or Jude Urbanski or Dee--somewhere in that letter soup and many I've left out, is where I had an awakening--again.

With all that said, I still have this great desire to help other writers. I will continue to incorporate that into my own writing, or maybe try to keep that separate somehow. But my quest is to finish that manuscript that resides on West 11th Street.
Maybe not with this manuscript currently, but the next one. But soon. I'm old, you know!
Posted by Crystal Laine at 7:39 AM

Maybe you could write a romance set on W. 11th Street. You know the area and remember the time period. I've got a recent historical (if there is such a thing) simmering on the backburner.

Ohhh, your story reminded me a bit of my own.

(I know the whole adage of don't taught your own story in response to someone elses, but it is applicable I think!)

I've always wanted to write. When I was 18, I started my first book. I had this idea, I had a theme, I put in an outline my plot and conflicts, even though I didn't know I was doing it.

Then I started to write. I got to about chapter 3 in a year. The 2nd year I deleted chapter 3 and rewrote half of it. Year 3 I added another scene, Year 4, I probably changed a paragraph. Year 5 maybe a sentence. You get the drift.

Blah, how confusing. Then it hit me. The book I was writing was this dramatic serious plot. I'm still pretty young (27) and I just doing think I was wise enough to give it justice.

So, I asked God, what DO you want me to write? I imagine him crossing his arms, smiling, and saying, "Guess?"

So today, I write romantic comedy. I wrote my first book in 3 months, while working full time, going through a merger at work, and having 3 small kids at home. I'd found my calling, my niche. And the story is one that is near and dear to my heart.

Anyway, I say all that to say, Pray:-) God has the exact story in mind that he wants you to write. I'll be praying too that you get this HUGE epiphany and that the words just gush out of you:-)

(sorry this is ridiculously long. I’m a blog roamer some days when I am having trouble getting into my writing groove. LOL)