When I Was Just a KId Captive Princess Contest

CONTEST OVER AT WHEN I WAS JUST A KID BLOG 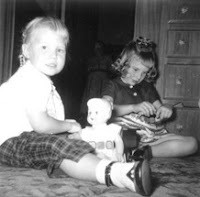 (Above: Wendy is on the right and her sister, Linda, is on the left, playing with dolls, of course!)

FIRST, THE WINNERS OF THE APRIL FOOL'S DAY NO FOOLING! CONTEST:

One winner of the April Fool's Day random drawing has reported in--Kim has won the Real TV series by Wendy Lawton in the No Fooling! contest!
Real TV Books based on reality TV shows These are well-written stories of teen girls based on the reality TV shows like Trading Spaces and Celebrity Fit Club. Their problems are real problems and are books teen girls would enjoy and be helpful to them.

I have yet to hear from Marilynn Griffith, who won Wendy Lawton's Lawton Doll Company Courage to Run Harriet Tubman doll.

I also have not heard from Janine, who won the Daughters of Faith book series of which Captive Princess was the newest release. The clock is ticking to report in to receive these prizes.

CLM: This was a fun contest--allowing readers to be a part of the process of coming up with a new book in a series. Readers may not know that this series (the Daughters of Faith) aren't your first time coming up with a creative series of real life characters. You did this for years as a doll designer who recently was awarded a Doll of the Year lifetime achievement award in the doll industry.

CLM:Can you tell us how you decide on a character for the series? What are some steps that you take to come to that decision for this particular series?

Wendy: It requires far more gut feeling than brainpower. The parameters I've set are that the girl:

(1) has to act out of a faith that changes the way she sees the world
(2) has to face conflict as a child and
(3) has to have taken a stand, or lived her faith while still a child in such a way that it could have cost her everything. The stakes have to be high and she has to have grown because of her stand and because of the reality of Christ in her life.

It's a tough standard. Some other elements that my publisher and I have discovered are that my readers especially love girls from American history— though I'm not opposed to introducing them to other settings. There are so many other things that go into choosing a character— I could write a book about it instead of a blog.

The steps I take are:

(1) I begin rooting around in history trying to scare up the my character. Sometimes I find the setting first and want to find the perfect girl to highlight. For instance I'm dying to write about a girl who lived in one of the underground railroad safe houses but so far I'm finding most of the houses were occupied by older folks.
(2) Once I've settled on a character and my editor and his team agree, I go to work on research. That's the fun part. When I do school visits I take along the stack of books I used to research Tinker's Daughter. I pile it up on the table next to my slim little book— it's a great visual! 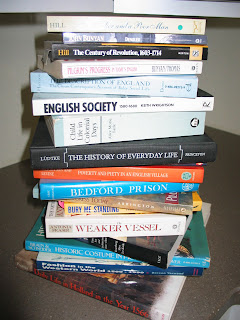 (3) If my initial research is borne out by the deeper research, then off I go.

CLM: How is coming up with a real life girl for this series the same as when you would come up with a doll design? And how is it different?

Wendy: When I created a different collection of dolls for each year I had to balance characters, concepts, sizes, prices, hair and eye colors, eras and continuing series. As much marketing mojo went into the development of the line as design and inspiration. It's much like a publisher develops his line for a particular season. They decide on slots and work to fill those slots. They want each individual book to positively shine but they also want to create a holistic line with balance— something for every one of their customers.


CLM:When your well runs dry, how do you recharge your creativity?

Wendy: I immerse myself in the fruits of other creative people. I read books or magazines, visit museums, play with textiles— anything that takes me out of the problem at hand and lets me hit it from a different angle. If I'm stuck on a book, I take clay and spend some time sculpting. If I've spent the whole day working on thorny client issues, I may go out to my studio and dress dolls. I believe it's crucial to have both right and left brain activities going— they feed off each other.

CLM: What are three key elements for you in getting into your writing mode? (after juggling many other jobs?)

Wendy:I am the queen of compartmentalization. I have a different physical place for each job I do. I have a well-organized office for my day job as a literary agent. 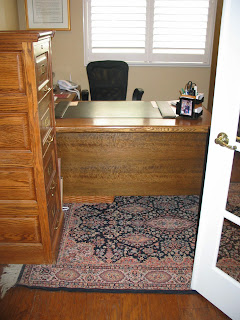 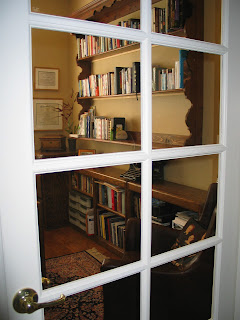 I have a art studio for sculpting and dollmaking. I can walk into either of these places and be at work with the first minute or two. Everything is in its place. 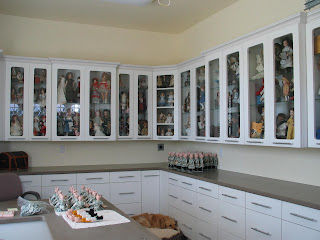 And I usually go away to write. In January, writer Bill Kritlow let Lauraine Snelling and me use his wonderful house at the top of a mountain. We were snowed in for the whole week and we wrote like fiends while we were there. So for me, the place gets me in writer's mode.

CLM: Answer this...The only thing I know for sure about my creative process is....

Wendy: It's 95% just showing up and only 5% inspiration. God has called me to the work I do. I need to be obedient to that work.

CLM: What's your favorite way to celebrate after a project is complete?

Wendy: I used to choose a special treasure with each book— kind of my own way of building an altar of stones. I'm a Kewpie collector— not the new ones but the early 20th century ones that were made in Germany. With several books I found the perfect Kewpie to mark the occasion.

The Kewpies I bought to commemorate the release of Tinker's Daughter and Courage to Run are below. Two books released at one time— two action Kewpies holding a book with another tome leaning against their legs.Perfect! 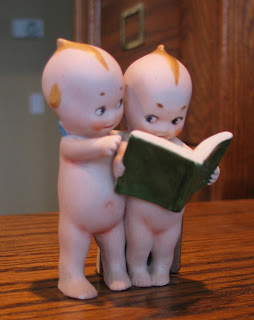 Now, I just frame the cover and add it to my collection of framed books covers. Mostly I just spend time praying that the stories will somehow touch girl's hearts.

CLM: Now that you have a list of some Daughters of Faith possibilities, what will be your next step?

Wendy: I'm going to be looking into several of them. I was amazed at some of the wonderful possibilities. Yes, many did not meet the criteria— they were already women when they took their stand— but I was delighted by some of the ideas. When I start poking into their stories I'll have to see if there's enough for a book, but I am ever so grateful to your readers. What a think tank!


CLM:Stay tuned,kiddie readers, for an exclusive scoop (if I can twist her arm) of what will be the next book (from this process) chosen to be in the Daughters of Faith series! Four hundred years ago, the village of Werowocomoco buzzed with the news that a group of tassantassuk— pale strangers— had came ashore from their great canoes and settled in the swampy, mosquito-infested wetland near the Chesapeake Bay. Eleven-year-old Pocahontas, daughter of the most powerful man to ever rule the alliance of Powhatan tribes, watched with curious eyes. Little did she suspect that their arrival would rock her world.

Is there an American student who doesn’t know some version of the story of Pocahontas— whether the fabricated Disney version or the equally fictitious but oft-told love story between Pocahontas and John Smith? Stories are most often told through the viewpoint of the Jamestown settlers, but with recent archeological explorations of the Werowocomoco site offering up a rich new understanding of Pocahontas’ people, Wendy Lawton digs into the history and tells it entirely through the eyes of the young Pocahontas. And though the romantic accounts are the stuff of legend and lore, Pocahontas’ faith story remains one of the most beautiful love stories in history.

The Captive Princess is the seventh in Lawton’s popular Daughters of the Faith series from Moody Publishers.

What others are saying:

“Pocahontas has long been a favorite character of mine, and Wendy Lawton brings her to glorious life in The Captive Princess. Through Lawton’s excellent research and vivid writing, walked out of the dense forest and into my heart. This book is a treasure!”

“I jumped at the chance to read Wendy Lawton’s latest book, The Captive Princess, because of her previous stories. Again, she wove her literary magic. Always true to historical facts and able to infuse spiritual truths naturally, Wendy Lawton is a master storyteller.”

Great interview, Crystal and Wendy! And to think I *almost* set foot in Wendy's art studio. :-)

A children's librarian, I enjoy sharing Wendy's "Daughters of Faith" series with young readers in our library system. I always give the books to girls who are looking for historical fiction--especially when they want a more biographical slant. When a girl has an assignment to read a biography about one of Wendy's "characters," along with a biography, I give her Wendy's book,providing the young reader with wonderful insights into the person's childhood--far more than what she'll find in the biography.

Keep writing this series, Wendy! When you need to, take off your agent's hat, grab your research, and head to a snowed-in mountain cabin to write more books! Judy