Imagine waking up and finding a moose looking at you through your window. Imagine throwing apples at said moose to get them to leave your harvest alone. (Imagine telling this story at meal time at Mt. Hermon Writers Conference and winning a free book for it and forever being known as the moose lady.) 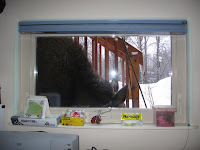 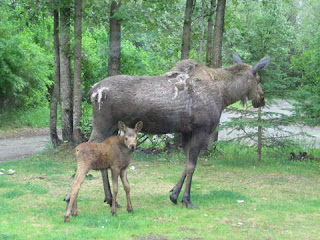 Or how about a bear clawing at your windows, leaving marks where he could've easily come in?

How about that time that the kids had to take a different route to school because moose were scrounging around the bus stop?

And oh, yeah, the time your car blew across the ice in the school parking lot because of a winter storm.

Who can forget watching your kids play in a huge state soccer tournament at midnight because that's when the Midnight Sun is most beautiful?


Yeah, well, if you are like me, you are fascinated by the life of Paula Lindstam, wife, mom,Bible study leader,writer, real estate agent and general-all-around adventurer. Her husband, also a real estate agent and a pilot, flies people around--because sometimes that is the only way to get there. I've been in a critique group with Paula for years and this woman has written some of my favorite stories. Her characters, settings and voice are rich with the experiences she has lived and observed as a lifetime resident of our huge state to the north--Alaska.

She thinks nothing of hopping a plane and traveling the world. Her kids are confident and independent. And why wouldn't they be? Check out a recent photo of Paula taking a ride (which she loved) on a canopy rip-line! 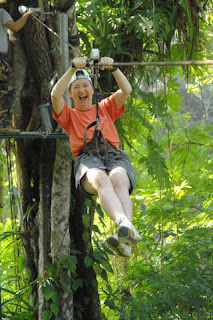 So, what is it like growing up in last frontier--Alaska?

Tell us about the places you have lived in Alaska.Where did you live?

Around the state of Alaska, mostly.(A little time in Washington state.) I moved from house to house seventeen times by the time I was nineteen years old. My dad worked for the Weather Bureau on and off for over thirty years and we moved from town to town for his job. The highlights are that I was born in Nome, have lived in Anchorage three times, (including the present,) lived in Fairbanks and, briefly, in Delta Jct., graduated from high school in Naknek while living fifteen miles away in King Salmon (twice).

Childhood Ambition: I just can't think of anything. I'm not one who has always known what she wanted to be when she grew up and worked toward that end. Life unfurled as I went along.

I can't say that I really enjoyed picking berries with my mother at the time, but as I look back it was a really sweet time. No matter where we lived in Alaska we picked local berries and my mother made jams and jellies and all manner of delicious things. I learned the names of the berries and where they grew, what they looked like. Black currants in the dark, dim woods near the Anchorage airport. Raspberries in sunny spots along the gravel road up on the hillside. Blueberries in the muskegs. I was very good about putting the berries in the bucket and not eating them. If I ate them it meant we would be picking longer and I usually wanted to be doing something more active.

I took a scuba diving class in Sitka, Alaska when I was going to college there. My proudest moment was when I got my open water dive certificate. Years later, the first time I ran into my diving instructor, he told me I was his first female student. It was a different world then.

Biggest Challenge as a child or teen:

Learning to drive the motorcycle I bought when I was sixteen. It was a Honda 100 and learning to drive the clutch was an agony I thought would never end. It took a good day, at least. I didn't learn to drive a car until a couple years later and the how-to-use-a-clutch lessons from the motorcycle stood me in good stead. In the Alaska Bush the state offered an Off-System Driver's License in order to legally drive there. No driving test was required. The only road was fifteen miles from King Salmon to Naknek in one direction and King Salmon to Naknek Lake in another direction. I got my first real car driver's license when I moved to Anchorage in 1981 when I was 24 years old.

I was a maid at the hotel in King Salmon, Alaska. The clientele were nearly all men, usually villagers stranded by weather, construction crews, or German sport fishermen. I still fold my towels the way I was taught at the hotel. The Germans would leave Swiss chocolates on their pillows for the maids. Mmmm. I don't think I'd known what real chocolate tasted like until then.

Reading, reading, reading. My favorites were biographies of first ladies. I also liked the Narnia series. In 1970, when I was thirteen, we moved to Fairbanks and lived in a small apartment for the summer. In an effort to find something for us to do my mother would take us to the library once a week. I think I read every book that a girl might want to read and was begging for more. There wasn't much to do and I just ate them up. 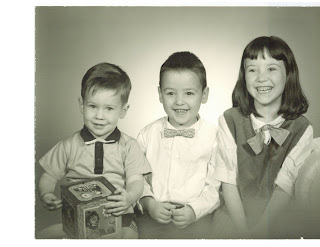 Girls weren't allowed to wear pants to school so my mother made all my clothes, which were dresses until I was in junior high. When I was six, she bought me a dress to wear for a picture taken of me and my brothers. I loved it! A store-bought dress. We still talk about it. (That's the dress in the above photo: Ralph, Duane and Paula in 1964.)It was the only studio picture ever taken of our family until we were adults. It was taken in Olympia, Washington where we lived my first semester of the first grade. We finally had access to a photographer/studio.

Swinging through the trees near my house in Anchorage. Someone set up a trapeze-like swing in the trees. We'd run and take a flying leap at it, hopefully grasp it, swing aways, and then let go and drop onto the dirt path below.

I went to a movie theater for the first time to see Mary Poppins. I was a young adult before I watched many movies. In the places we lived where we had television my favorites were Get Smart and My Three Sons.

Meet the Austins by Madeleine L'Engle. I also liked The Four Story Mistake by Elizabeth Enright.

Childhood Hero: My dad was and is, the smartest person that I know. 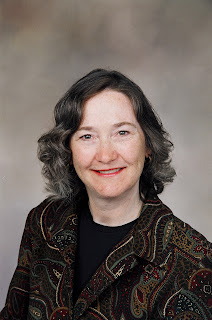 Anything you would like to add that my readers might be interested in knowing about you as a child or how your childhood may have influenced your writing as an adult:

My childhood was filled with such interesting people. It seems that if someone runs away from their life, they go to an exotic locale and start over. Alaska is one of those places they run to, so when I was a child my family tended to meet and befriend people with the most varied backgrounds. I like to weave those incongruous tidbits into my characters' personalities. The skinny old man wearing overalls as he swamps out the vacant apartment probably owns the building and used to be a top defense attorney in another state until his wife left him and his secretary embezzled all his money. I met people with outrageous stories like that all the time growing up. It really helps one not to leap to conclusions based upon looks.
Posted by Crystal Laine at 7:25 PM

Email ThisBlogThis!Share to TwitterShare to FacebookShare to Pinterest
Labels: Alaska, Christian authors, moose, Paula Lindstam, When I Was Just a Kid

Wow, I wish I was that cool!!! Paula rocks. Thanks for sharing with us, Crystal. :)

Really cool article of course I am biased.

This just whets my appetite. We want Alaska stories, Paula. I know a literary agent who'd be interested...

Again, Crystal, thank you. Can this blog get any better?