These days the kids going to the prom get creative when it comes to clothes. It used to be that the prom had a "theme" (that would be "back in the day." My day.) A committee would decorate the gym. There would be a DJ who spun records for the boys to stand in a group and hem and haw, while the girls either tapped their toes or danced in a group to the latest dance craze (in my day, "Locomotion.")A lot of us girls made our dresses, the boys bought us corsages and rented tuxes or wore suits.

Now kids go to some expensive ballroom/activity center ($70. for tickets!!!!!) and well, they might still make their outfits (Or rent something,) but this ain't their mama's and daddy's prom.

Number 3 son this year made his prom outfit out of duct tape. Some of you may already be aware of the duct-tape prom clothes. It was his date's idea and over a month before the prom, she came up with the designs and the color theme, and they worked hours. They even had duct-taped shoes. When they first told me what they were going to do, I was a little hesitant, but made one demand: "Make sure they'll let you into the prom." 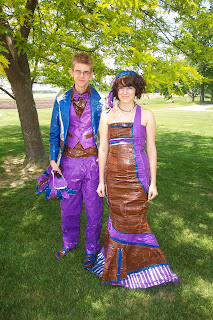 Their outfits turned out super--and they looked like leather. Ultra-cool, they were the hit of their prom. (Maybe they don't say "cool" anymore...Sigh.)It took hours and hours (they didn't keep track of this) and 24 rolls. They used a shiny silver, bright blue, shiny brown and purple. It looked like leather and the outfits weighed a ton. They had to put "feathers" on them so they also made a "bird hat" that was kind of cool. Their art teacher made them talk about it in class. If they win, they both get scholarships, so I'll let you know if that happens! Big competition. But, they were winners in my book in design and ingenuity. 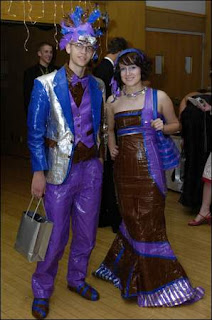 Posted by Crystal Laine at 8:40 AM

Simply amazing! I'm hoping the scholarship is to FIT (Fashion Institute of Technology) in NYC. These kids are that talented. There is nothing harder to tailor than a man's jacket and to do it with duct tape...

My husband and I were just talking about that competition. We saw some of the amazing previous winners!!

They did such a good job, I love the leather look!

I'm so glad you posted because now I can ask the question we pondered...weren't the outfits just hot and stuffy and uncomfortable?

I will interview them and get back to you on these questions/comments! If anyone else has any questions about it, go ahead and ask. (ha)

I wish you could see the detail on the dress. There are these little long-line scallops in the skirt of it. Fabulous detail. She has an artist's eye for design. She is going to be a senior in HS this coming fall.

My son is going to university in the fall(he graduated from HS this year) and studying telecommunications and criminal justice. He has a lot of patience. (LOL)

I still find this awesome. What a fun memory for them. ;)

Wow! I am very impressed!