I have a journal book that I've had for years called A Family Legacy for Your Children: Reflections from a Mother's Heart: Your Life Story in Your Own Words.I'm just now getting around to writing responses in it according to the prompts. I'm having a hard time.


James Thurber said in his book, My Life and Hard Times (my favorite book, by the way...):
"Benevenuto Cellini said that a man should be at least forty years old before he undertakes so fine an enterprise as that of setting down the story of his life. He said also that an autobiographer should have accomplished something of excellence. Nowadays nobody who has a typewriter pays any attention to the old master's quaint rules."
This makes me laugh. What would James Thurber think of blogdom? (I think he'd definitely be in the thick of the blog world. He died in 1961, though.)

Well, I have not accomplished much of "excellence" according to the world at large, but I do qualify according Cellini's age requirements. So, I have been inclined lately to write down some thoughts in that "legacy" journal for my boys. Did I say that I'm having a hard time? I really fit more into James Thurber's book and memories--and could probably find more prompts there to instigate my memories.

I was particularly struggling over this one: "Describe your mother in her best dress."

Yes, my mother had a lot of dresses at various points in her life, so no problem there. Before the fabulous late '60s/early '70s, that's probably all she wore were dresses--even at home. Every photo I have of her in black and white, she is wearing a dress. But I don't remember her dresses. I have a hard time even thinking of her in dress in my memories of life with her. She wore shorts, pedal pushers, slacks--she was always sporty and tall and thin. I couldn't remember. I stared at that page for a long time. It upset me that I couldn't remember her in dresses because I know she wore them for special occasions and church. And she was very conscious of her appearance, though she wore minimal make up and jewelry, she always looked "movie star"ish. She had an Audrey Hepburn flair, but looked more like Kim Novak. (Ok, you people are going to say, "Who?" ha)

Then, I found this photo. I remember her agonizing over choosing this dress. Shopping with her sister for hours. It was the mother of the groom dress for my brother's first marriage. The marriage didn't last, but I remembered the dress--I have this dress in my special trunk where I keep my own wedding dress, my "going away" dress and various keepsakes of that sort. I have this dress. I couldn't part with it because I thought she never looked more beautiful to me as she did in this dress. Maybe I was emotionally sentimental at the time. There were lots of issues going on that time and I was very, very big with my pregnancy of our second son.

If anyone would pull this dress out of my trunk at my death, they wouldn't have a clue as to why I have it. So, maybe I'll put this blog with it.

However,the last dress I ever bought for my mother is the one I remember emotionally with great detail.

Mom died on a Saturday in her chair. She was on home oxygen, her heart had moved to the center and slightly to the other side of her chest because she didn't have a lung on that side anymore, so her health was deteriorating. She had already lived well past what doctors had predicted. She had ordered a navy blue and white dress because she had determined that she was going to go to church with me, my family and her husband--my father--the next day. It hung in a back spare bedroom on the door. She had a long, pleasant conversation on the phone with my uncle, her youngest brother, and then quietly slipped away into Jesus's arms, sitting in her chair. She never wore the navy and white dress. I can't remember what she was wearing in that chair. Some sort of nondescript house coat. It was her "Sabbath," as she always believed in worshipping God on Saturday.

I just couldn't bury her in that dress, because in my mind I had a certain look I wanted to accomplish for her final appearance in this earthly, broken body. So, I went shopping. My sister-in-law, Melba (my husband's sister who has gone with me on many of these kinds of journeys) went with me. She didn't say much, just mostly held my hand. The best kind of person to have in times like this.

I bought mom a pink dress with a beautiful brocade jacket with burgundies and pinks and gold and silver blue roses in it. It went beautifully with her white satin-lined casket with the pink roses embroidered in the lid. It was pink.

My aunt asked me what I had gotten mom to bury her in when I returned from dropping the items off at the funeral home. This is quite important in my family. When I told her, she said, "Oh, what'd you do that for? Her favorite color was blue!" and I nearly broke down into tears at her harsh, critical comment, but I'm one of those people who is stubborn and stoic. I just said, "Because she'll look beautiful in it."

I had no idea how she would look in it. When I had last seen my mother, she looked ill and pasty white and was sitting up in her chair, not there anymore. The warmth of her essence gone and my image of her into another etheral dimension. She was dead. I stroked her hands and her hair of her dead body. It just wasn't her. She had certainly changed from the tall, very good-looking and kind-hearted humorous mother I always knew. But she looked so peaceful. A final expression on her face that was her. So, my thought was she looked fabulous in pink, so I would bury her in pink.

Just so I do not leave you with a horrible last thought of my aunt (my dad's sister,) you have to understand that my aunt was grieving, and she had been friends with my mother longer than I had been on earth. She had her own memories of dresses and my mom's appearance. In the funeral home when just the family went into the casket room prior to opening up the viewing to the public, my aunt put her arm around me and leaned into me and said, "She looks beautiful. The pink was a good choice."

There is always a story to go along with simple exercises like these. Describe your mother in her best dress. If you have 10 siblings, I bet you'd get 10 different responses to this question because every person has their own memories, own image of someone dear to them in their mind. I can't even imagine what my boys would say about my appearance if they had to answer this question. (I'm a little worried, as a matter of fact, of what they would say!)

So, I am not sure what my response is to this prompt. Maybe just simply, "The dress was pink." 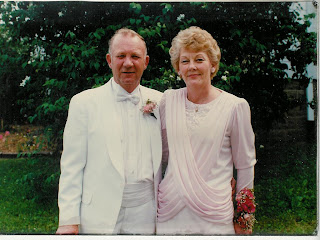 I have a Thomas Kincade book like that. Mother's Memories for her children. I keep looking at that book with guilt. I have yet to write in it.

I bought one for my Gram and when she died I looked for it. I was so disappointed when I found she hadn't written anything in it yet. You made me want to get mine out and work on it. ;)

I know, Sabrina! I, too, felt that guilt. I had given my mother a memoir book and she didn't write in it, either. I think because it's a nice book, you feel like you have to be "perfect" as to what you write down in it, or you think, "Oh, this isn't really important," but it really is important. Write something down every Sunday. I'll be checking on you...(smile)

I don't have a Mother's book, but my step-daughter recently bought me a Grandmother's book. She wants me to fill it out now so she can put it up and keep it for her future children. I got a start on it...but that's about it. I like the Mother's journals though and I think I may have to go get one.

Your Mama was beautiful in pink.

We have a book like this about my father- and mother-in-law.
My husband and I purchased the book and we all sat down and we asked them the questions and we wrote down their answers.

This way we had a fun discussion as we filled it in.

Although it was a sad time because of a serious illness she had, we have fond memories of filling in the book.

Thanks for sharing these touching stories.

Delia, You always say the right things--thank you!

Cathy, Thank you for reading and encouraging.

We all get something from little memory jogs from each other--things that trigger those places in our hearts that remember.

Thank you so much for reading, Terry, (and all of you!) I appreciate the time you take to check in on my blog.