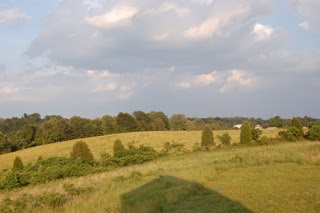 I'm so glad I was able to go this past week. I had a great time. Now I'm back in my own home, fussing and thinking about things that I really wish would go away. (My dog is at this moment begging to go out and it's raining out.)And my mind still wanders back to this scene-- I still want to capture it myself with paints or colored pencils, but maybe I'll just cherish it in my mind where it will remain as I saw it. For one thing, I have a lot to do (like take out my desperate dog Lizzie.)
Posted by Crystal Laine at 6:29 PM

No phones, no TVs, no distractions, just time to enjoy God's wonderful creations... sounds like the perfect getaway to me. (Of course, without the violent hummingbirds, though.)

I'm glad you got to get away. But I'm also glad that you're back :)

Crystal, life is rough, but somebody's gotta rent those log cabins. It sounds like my kind of vacation--away from all the connectivity and immersed in nature. I'm envious.